Your beloved mum passed on at the same age as my nenek last year.

Bang Captain, a main who does not mince his words nor suffer fools gladly enables "comment moderation" on his blog. This was to deter anonymous hacks and fools.

His beloved mother passed on barely four days ago and I posted my condolences about three days later - or more precisely, only three days ago.

Two days later (the 17th - or maybe even as late as yesterday, the 18th?) he had approved our comments to appear in the cybersphere. My only solace, therefore, was he had read my very last comment to him, along with Pak Zawi's and others.

Who's to know The Maker was to take him away too? Barely five days after his beloved mother who had brought him into this world?

Many may not know this but it was I who "introduced" him to the blogging fraternity. He had approached me first, not because I was a blogger of any repute, but because I was "family". Furthermore, we also shared the same alma mater.

In the 50s he lived right behind my late grandmothers house in Seremban, which meant that my uncles were his playmates. My mum, the eldest, was a good ten years older so he called her Kak Zah. I had just broken the news to my mum, long distance from a rig in the mangrove swamps of Samarinda, Indonesia, where she will convey the sad news to his childhood playmates - my two surviving uncles.

These photos were taken sometime in early 2007 when I brought Bang Captain to meet the heavyweights for the first time . He has since become great friends with these bloggers,and a regular fixture at their gatherings, where I, unfortunately continue to languish in crocodile-infested river estuaries.

I have no doubt he will be sorely missed by these bloggers, as will his family and friends.

And so will I.


Many thanks to Elviza, Pak Zawi and others who had alerted me of Arwah's passing. Al-Fatehah.

I am rehashing one of my earlier posts because of the comment he posted. Skip the story if you like and head directly to his comment. My grandmother too had passed on about a year ago.

The Matriarch, The Nude and The Chicken Coop

The year was ‘69 and I was in my first year of school. 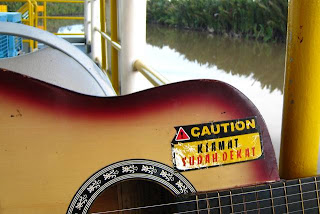 With the day drawing to a close, Nenek’s high-pitched shrieks can be heard permeating the soggy evening air - summoning me for my evening bath at the well. In the days before electricity found its way into our kampong, the path to the well could very well be perilous you can imagine. It got dark very quickly too, because the sun seemed to set a lot earlier in the kampong. But a likelier explanation would be the abundance of tall trees quickly blocking the sun’s rays, and thus with an irrational jealous pang I wondered (no, I'm sure) whether kids in the city would still be out playing.

I sat on the stoop of out in front, defiant and ignoring Nenek's calls, the cement feeling like a block of ice under my buttocks; the stone made cold from sun's fading warmth.

In that melancholic evening, I believed I felt the first stirrings of emotions that I can ever remember. It was feelings of hate and of rejection all rolled into one – the exaggerated version for seven year olds. 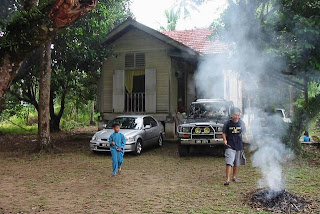 The reason for my slow-burning resentment was my being exiled from my parents. Father worked in an estate faraway where the only primary schooling available was for the children of estate laborers (read: Tamil). In the highly gentrified environment of post-colonial plantations, no conductor or mandor worth his salt would be caught dead having their children in a vernacular school, especially a Tamil one. But given a choice, I wouldn’t have minded being in an impoverished Tamil school. At least I would be in the bosom of my beloved parents.

My grandparents were the kindest of people, just like most grandparents the world over. Their efforts to cheer me by spoiling me didn’t often lift the veil of sadness that hung over like a monsoon cloud. And spoiled me they did, because Atuk catered to (almost) every whim of their first grandchild. He even got me a dog once, but that story will have to wait. Strangely I hear they weren’t always kind to their own offspring – I remember Mother telling me a story once when uncle broke his arm after falling from a rambutan tree—an additional beating was in store for him when Atuk came home from work. To drive the lesson home, I suppose.

That very same uncle, who was an overdue bachelor at the time of my incarceration was entrusted to keep me in line, and he took on the sacred covenant from my parents with utmost religious zeal. And trust me, he had quite a few sticks rather than carrots in his bag of tricks to enable him to carry the job. Sorta like George (Bush).

For failing to memorize to multiplication tables, an apt punishment for one was where I would have to spend moments of sheer terror in the chicken coop. The sheer terror factor was ratcheted manifold if the sentencing was conducted after sunset. Not one to go down without a fight, I was often dragged kicking and screaming into the hen house. And only to be released when either Atuk or Nenek happened to chance upon the scene. Uncle’s intentions were good no doubt, but what if there was a thirty-foot long python lying there in wait?

The chicken coop had its place in history somewhere further down the line and became (to me at least), one of the most celebrated but unknown chicken coops in existence. How so? Let me explain. Late into adulthood I discovered that my grandparents at various times before I came into being had hosted ‘foster’ children in their government quarters in Seremban. Atuk’s job as a chief clerk in the old colonial administration allowed them a modest wooden house across the famed King George the Fifth School, popularly known by its acronym KGV.

These weren’t real foster children you see, but kids of distant relatives and acquaintances from remote villages who were sent (boys usually) to my grandparents house because of its proximity to the premier British institution. One of the ‘foster’ children – this shocked me really – went on to become one the most celebrated and highest paid painters in Bolehsia. In ’98 one of his Pago Pago Series oils went under the hammer for a record 40,250 Singapore dollars at a Christie’s Singapore auction. Ohmigosh!

Just before leaving for Europe in the 60’s to live the bohemian life as an artist, Latif Mohideen gave three of his paintings to Atuk and Nenek as a token of gratitude. One was an 'impressionist', the one I recalled hanging high above the grandfather clock and was the first thing you see upon entering the threshold of our kampong house. Alas it graced our living room but for the briefest of time. Later, Nenek came to realize that it was a rather convoluted surrealist version of a nude with a huge single breast and an outsized areola. Latif must've painted this during the phase when and Picasso and Dali were considered de rigueur.

Of course, this didn’t fit well with nenek’s image as an Ustaza who taught the Koran at the village Madrasah, so one fine afternoon she got Atuk to take it down. And there it stayed in the shed at the back of the house, forever to remain anonymous to people with fat wallets who attend Christie’s and Sotheby’s auctions, and also to scholars in fine arts departments at universities the world over. 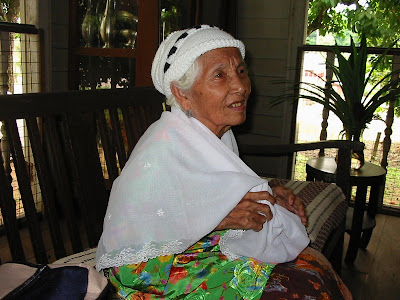 Years passed and with Atuk’s demise in the very early 90s, nenek had no choice but to shuttle between my one surviving uncle and a Chinese daughter-in-law (Yes, that uncle has since passed on - Al Fatihah) in Seremban. On occasions she would stay with Mother too. With no one to care for the creaking boards and peeling paint, the house became more and more decrepit, as unloved homes are wont to do.

It was only a decade or so ago that I decided to enquire about the painting. You don’t how much I’ve regretted my tardiness since. Nenek is still alive but is somewhat senile, and once, in between bouts of lucidity, she let it slip to her favorite grandson (that’s me) - that Atuk had used the painting (yes, "breast/areola") to patch the roof of the chicken coop.

I don't blame Atuk at all for his lack of aesthetic acumen - because who was to know what the future holds? Atuk had also once also traded his Rolex (it had cost him seven-hundred in 60s Bolehsian ringgits) for a dinghy digital watch to a backpacker who passed through the village. Please remember that this happened in the 70s and digital watches with blinking LEDs with faux gold bracelets were a novelty, if not expensive. That's the sort of person Atuk was - bless his soul - always ready to oblige.

I’m still in the hunt for the other two paintings though, one of which was a typical scene of village women toiling in paddy fields at harvest time. For the life of me, I can’t quite remember what the other one was.

Further inquiries revealed that none of my uncles knew where the paintings went. Nor Mother. Nor anybody else. Even Latif Mohideen has fled the scene. Hmmm . . . I shall need to pay a visit to the village house soon - but the dilapidated doors and windows have remained shuttered since - what ? - two, three years ago?

Somehow I have this burning need to fulfill my quest, just to give it some closure, if nothing else. Maybe I should give it a rest. But maybe I should start looking at the cow shed, because the chicken coop has long been gone and the chickens have since been converted to human protein or quite possibly devoured by that thirty-foot python or its progeny.

Years ago I paid the village idiot some money to dismantle the chicken coop and burn that sorry piece of eyesore (and of bad memories) to make the grounds presentable for a Hari Raya Eid celebration - the photos you see in the story. Deep, deep down, my brain strongly rejects any possibility that the Nude could have already turned to carbon. I'm sure some good sense must have prevailed, but we're talking about the village idiot here, who is known only by his nickname Berok (Malay for Monkey) for his climbing prowess and proclivity in collecting coconuts from trees. Perhaps, and most very likely, that the idiot here is me.

Whoa - there could be a gross total of somewhere between 100 and 200 thousand Bolehsia dollars out there sitting among the rafters and junk of my childhood home.

But who am I kidding?

Note comments by Arwah and the first of Kickdefella's comments.

I remember Latif Mohideen. As a schoolboy he had painted the murals in the KGV school hall. I wonder if it is still there, could be worth a lot of money now.

I also remember your grandparents and they were very kind to me when I was the neighborhood kid a couple of doors away.

I love reading this. I know this is my first comment here, but when I read about your missed rendezvous with you Pa, I felt really sad.

This piece which I read today remind me to a lot of think. Perhaps its time for me to leave KL.