His eyes scanned the cavernous lobby, and save for night manager behind the reception the place looked empty. He looked at his Swiss chronometer, the mechanical hands telling him it is . He quickly emptied his pockets – a tattered Burberry wallet bulging with a million rupiahs, a box of Dunhills, Cricket lighter, a cheap Nokia mobile and some loose change on the tray before passing through the airport-type metal detector.

Collecting his belongings he nodded at the night manager and proceeded to turn right, cocking his head to hear the faint strains of a live band playing Owner of a lonely heart.

“Not bad . . . band sounds alright”, he muttered, and looked forward to having a drink to relax after a hectic day of traveling with the usual accompanying highs and lows. Mostly lows. He was on ‘low’ now. Like most ‘cover bands’ he had experienced in hotel pubs and discos across , he would certainly welcome the distraction of the skimpy outfits the female singers afforded. With the thought, his steps quickly gathered purpose.

“Shit”, he cursed. He had forgotten to bring his Canon compact camera along, which he normally carries. After all it was small enough to carry in his jeans pocket. He had left it in the drawer of the hotel, some fifteen minutes away by bechak further up along Jalan Ahmad Basuki, the main downtown thoroughfare in . The reason he went to the Hyatt was purely logistical – it being the closest five-star hotel –with a presumably decent live band.

“What the hell, it’s a long shot anyway…” he said, and entered the threshold of the hotel’s bar…

The events as the story unfolds to our anti-hero Mat Salo happened mostly on March the 12th and spilling over to March the 13th.

Ever the intrepid schemer and opportunist, he held strictly to the adage: You only live once. The other thing he was mostly likely to tell people is to work hard and play hard. And yeah, playing hard meant the wine, women and song bit -- mostly song.

Just a day earlier he was marooned on a drilling rig in the oilfields of eastern , chasing the ever-shrinking-once-almighty buck when a section of the well he was drilling finished. It was March the 11th.

Seditious thoughts came to him, if I catch a chopper to tomorrow, I just might make the afternoon flight to , see the show, fly back on the 13th and be back by the 14th.

All in all he planned to disappear for a total of seventy-two hours, hopping over from , to ’s second largest city in . Jawa Timur is often times described as the heart of , home to the founders of Bung Karno and Pak Harto, along with that venerable institution PT HM SAMPOERNA, makers of the wildly popular clove cigarettes. When most major cities in the world only have a meager street or two of 'red-light ', Surabaya boasts a whole unique district -'Dolly' - dedicated strictly to the pleasures of the flesh.

He looked forward to visiting this interesting city.

And why not do it? Why not, indeed, he thought. The trouble is, his employer mustn’t know. If he fails to be back on the rig at the appointed time, the drilling operations for the next phase would be seriously jeopardized. The company would certainly be facing a heavy lawsuit for work suspension. . .

Buy hey, you only live once right?

Against his better judgment, he went ahead. So our anti-hero booked himself on the first helicopter to ’s Sepinggan International. Luckily for him the main domestic flight terminal was across the tarmac but he needed money to finance the day’s unlikely and potentially disastrous activities. Exiting the chopper, he made sure his fellow passengers would make no mention of his whereabouts; swearing them to secrecy with promises of ‘I owe you’ and ‘drinks-on-me-next-time?’

As far as his boss was concerned, Mat Salo was safely ensconced on the rig.

He grabbed a taxi and headed to the nearest ATM –that would be the BCA Bank – where in two separate transactions he was richer by three million rupiahs, quickly doubling back to the airport to purchase the – on Lion Air. The flight had two seats left. Ah, it’s gonna be my lucky day.

But once in , he still needed tickets to see the ToTo, which was reputedly to be the last time this legendary band was going to tour the world. If our bumbling anti-hero gets there only to find the tickets sold-out? He'd rather not ponder the negatives.

And he insisted on not leaving a paper trail too, therefore any transactions involving the internet, charge or credit cards were a no-no. Everything would be cash. This, our anti-hero thought, harks back to his passion for John Le Carre’s and Robert Ludlum’s protagonists. No trail. Hopefully not even DNA.

The Lion Air 727 touched down precisely at local East Javanese time. In his window seat he watches for the first time the pavilion of Juanda International, gateway to , gliding by. He moves the hands of his Swiss mechanical back by one hour. Plenty of time, he mused.

On rushing out of the tarmac and into the air-conditioned arrivals he quickly looks for the KAHA counter, carrying only small duffel bag slung across his shoulder. Why bother? He only planned to be in the city for something like twenty-two hours, so like all good characters in spy novels he travels light.

The KAHA counter is where one buys a voucher at a usually good rate for any of the major hotels in town. The waifish jilbab-ed doe-eyed beauty recommended a nice three-star close to where he planned to go. She had also emphasized, while giving him a sly once-over, that the rate includes breakfast for two and a king sized bed.

Half-embarrassed he winks at her and light-heartedly tries a small joke.

“Well, Pak”, again that coy smile against a teeth so white and lips so pink with gloss – “one never knows, right?” The lips close deliciously and the eyes twinkle and move coquettishly away.

The ubiquitous Blue Bird taxis lined the arrivals terminal. The 70,000 rupiah voucher he purchased at the counter would take him anywhere in the city center. The sopir obligingly lowered the passenger window so he could enjoy the first drag of the Dunhill’s post-flight.

Friends who had been to Surabaya (he does have his clandestine contacts) had warned of the infamous macet - traffic jam – so he factored in one hour to get to the city center, even if it’s only twenty-five or so kilometers away. , after all, is one of the largest cities in the world.

He arrives at the hotel, pleased to know that a large mall was nearby and the concert venue was also close. In the room he perused the Yellow Pages and called Disc Tarra, a chain of the largest CD/DVD stores in . He called the one at the mall adjacent to the hotel. The pleasant sales guy said he ran out of tickets – perhaps Bapak would like to try the venue itself?

It turned out the taxi ride to the – a gaudy Roman styled building was only ten minutes away.

He was impressed right away; flags with the band’s image fluttering in orderly rows near at the car park, his heart drumming and hoping the tickets would still be available. Apparently the venue could only seat a thousand.

Beads of sweat lined his forehead while he stood in line, relieved that the most expensive ‘VVIP’ tickets were still available. Alas, after handing over the 350,000 rupiahs (about 35 US dollars), he was not given a ticket, but a receipt.

What? A receipt, in lieu of a ticket?

“What the…” he began. But the clerk at the counter patiently explained the recent spate of counterfeit tickets at concert venues had made this necessary. The tickets would be exchanged later, at the gates, before the start of the show. 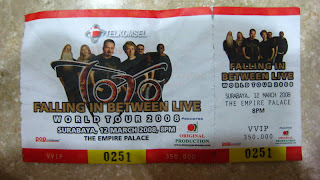 And a few hours later, at the , along with scores of other disgruntled patrons, Mat Salo had ‘invaded’ the empty stage, demanding answers. But the promoters were nowhere to be seen and riot police had arrived to secure order. But there was nothing he could do but cut his losses. Understandably, he was bitterly disappointed. 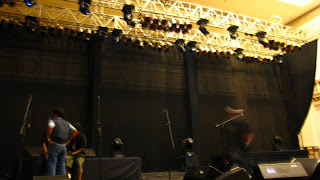 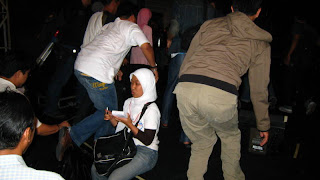 The band’s equipment – the word was, had gotten ‘stuck’ at customs in . The concert was now forced to be postponed the following night.

But he has no chance at all to stay the extra day. If he stays, he’ll lose his job.

So, it had been pointless after all: a lesson in frivolity and stupidity.

He hung around a while, looking like a zombie and figuring what to do next before deciding on a leisurely bechak ride back to the hotel.

And that was how, a few hours later he found himself at the bar of the Hyatt.

He didn't know it then, but his luck was about to change. 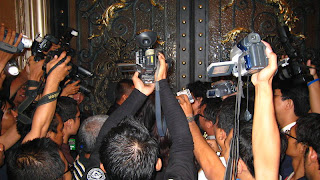 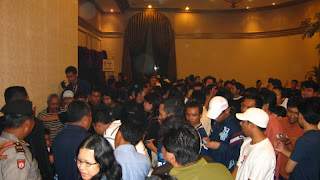 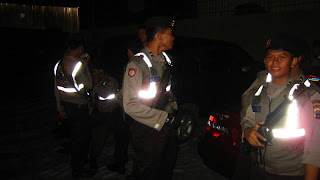