Your Last Goodbye, And A Grandson Who Deserves Hell The old Malay lady at the bed closest to the wall had not stirred. Although bed-ridden and immobile, she was 'an early riser', often speaking to herself, cataract glazed eyes blinking at the fluorescent lamp overhead.

This harried male nurse, Nelson, perhaps shedding a tear from having to care for this lady during her dying days; having fed her through the feeding tube, had bathed her and moved her limbs every so often lest she gets bed-sores. He then sets in motion events that would culminate in a phone call a quarter of an hour later, across the seas to the grandson who had put her there in the nursing home.

The grandson, her first, her most beloved, the one she cared for in the early years of his life, right until his second year of school. That impudent boy, often forcing his grandmother to walk in the dark to the well at the back of the village house, to bring him bath water which she must first boil in a huge blackened pot underneath a crackling fire. The boy simply must have hot water to bathe. If he remembers correctly, it took at least three trips to the well as the zinc pail was rather small. The boy refused to bathe at the well, even with his grandfather present. Because he was afraid of walking in the dark, or of slithering creatures that might cross his path, or of the freezing water. Because being the only grandson he was used to being the center of the universe.

Now the boy has grown into a man; a man full of guilt, full of impotence at his inability to care for his maternal grandma. In 2004 when his grandma was staying at his mother's house, grandma slipped in the bathroom and broke her hip. She was hospitalized, and from that day on everything quickly deteriorated. After recovering sufficiently enough, she was brought home again to his mother's house. He tried hiring live-in maids (illegally procured in Kampung Pandan) but none could bear the heavy responsibility of a total invalid, often leaving within days of arriving.

His own mother at the time was approaching seventy and a decision, however unpleasant, needs to be made. He did not want to burden his already aging mother to care for an invalid. The only thing to do was seek professional care. And that was how the grandson had 'sentenced' his very own grandmother, the one who had selflessly bathed, clothed and fed him for the first eight years of his life, to a nursing home a few houses away from Anwar Ibrahim's PKR headquarters in leafy Section 16, Petaling Jaya.

But that insolent boy who grew up to be an insolent middle-aged man, whatever his faults, still had a rational mind - if one could charitably call it that - an ability to still feel something.

Because each time he drives past the nursing home, his hands never fails to bang on the steering wheel - and he can't help but think:

"You're going to hell for this boy, and you know it."

That's why nothing fazes him anymore. He resigns himself to circumstance, accepting fate, feeling hell is something he deserves.

He doesn't have to go so far, oh no. Hell has already visited him today. When he received the phone call barely three hours ago, he knew then that he was never going to see his sweet grandma again. Even if he had managed to get off the ship now, the soonest he could get to Kuala Lumpur is tonight. It will be too damn late. The remains would be sent from Section 16, to UH probably, before being sent in a van to Seremban for a quick burial after zohor today.

Yes, Muslims go for the quick burial thing; something he strongly disagrees with, for it does not fit in with his selfish needs. And the thought probably will seal his fate in the afterlife. He laments; why can't Muslims have a wake, like the Chinese who for a few days could parade the embalmed body? At least time enough for her beloved first grandchild, the one she fondly calls Abang, the one who had shackled her to a bed in a nursing home, in leafy Section 16 at that- to come home from overseas so he can lay eyes on her for the very last time? 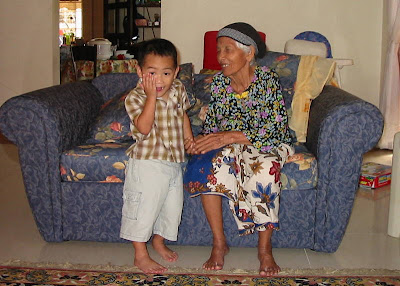 The last photograph was taken in 2004, on Hari Raya Haji Idul Adha, a month before she fell in her daughter's bathroom, broke her hip and quickly began to lose her faculties.The boy is her great-grandson, her beloved grandson's second son. The one working overseas. The one who had not bothered to carry her to her final resting place. Or pour dirt in the well of her grave, nor sprinkle her flowers.

For those so inclined, the grandson had also blogged about her once, and you can read it here.