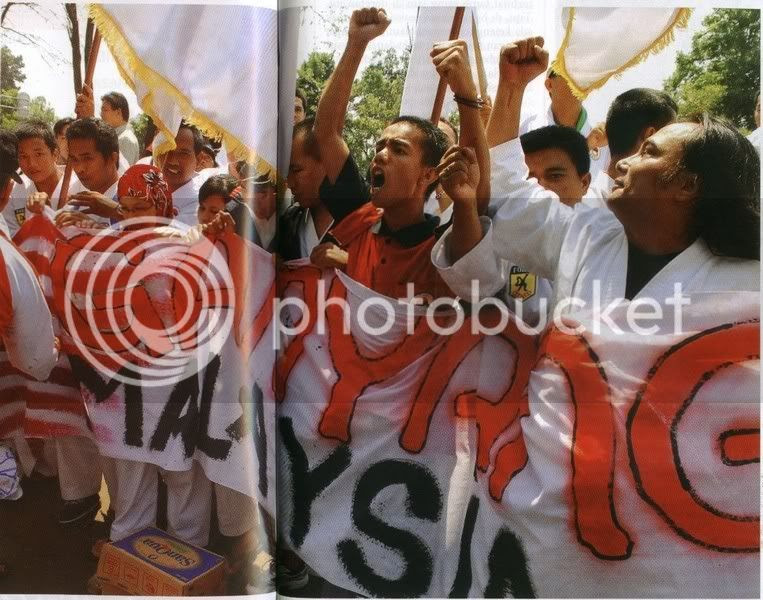 On the cusp of turning 50, Malaysia rears its ugly, arrogant head

Sorry for being tardy in updating my blog. Have been a bit busy lately, and I'm sure, so have you. What with celebrating Merdeka and busy pondering over the bujet.

Working in Indonesia I had the unenviable task of fending off criticisms (and still coming in, I assure you) over the "Wasit Donald" incident. Just to refresh you a bit, Wasit (referee) Donald, the Indonesian karate referee who was ignominiously waylaid and beaten up by four plainclothes policemen outside the Allson Klana Resort in Nilai, Negri Sembilan a week before our so-called "50 th" Merdeka celebrations.

This had created a furore of sorts in Indonesia.

And the cries of Ganyang Malaysia are still heard in some venerable hot spots across this vast archipelago of close to a quarter billion people.

Gatra, the influential weekly newsmagazine, chose to do a front cover piece on the relations between Indonesia and Malaysia in its latest September 6th edition.

Malaysians need to be reminded that Indonesia’s press is truly free, and they can choose to highlight whatever they like – no “4th Floor” pseudo-editors to whip the Malaysian press and shape the Nation’s news. Therefore it is prudent for Malaysia to mind their bigger tetangga.

Although the press in Malaysia chose not to carry news of Pak Lah’s personal telephone call to President SBY apologizing over the incident, that event was fortunately given a lot of prominence here. So was IGP Tan Sri Musa Hassan’s personal letter of apology (in English) read by Malaysia’s Ambassador to Indonesia Dato’ Zainal Abidin to Donald Kolopita at his bedside at Jakarta’s Pertamina hospital.

I say “fortunate” because perhaps the apology helped douse some of the raging fire of discontent of its citizens. However, some quarters here simply think that ‘Sorry, for the incident – we promise to investigate and deal with the culprits in accordance with Malaysian laws’ – simply isn’t enough. They want justice to be seen and done swiftly.

Even seating Indonesia's VP Yusuf Kalla (a Bugisman too, I might add) in the guest of honor position flanking PM Pak Lah and fellow DPM-cum-Bugisman at the recent Merdeka morning parade didn't help to cool things down. In fact, speculation abounds as to why SBY spurned the invitation to attend and sent his deputy instead was to placate his critics. But this could all be "spin", eh?

There were reports of Petronas petrol stations in Jakarta being blockaded although I can’t confirm this.

There were reports of marauding youths attempting to harass visiting Malaysian badminton players at a hotel in Surabaya.

I now carry my Indonesian Residency Permit (KITAS) on my person at all times if I happen to be in town. Even the once free-wheeling Mat Salo is getting paranoid.

(Like the rules arbritarily enforced on Indonesian guest workers at the whims and fancies of RELA personnel, pehaps carrying just the KITAS alone isn't enough. One can get detained for not carrying the passport AND the work permit too, for example.)

I was also alerted by my Indonesian friends and colleagues here on the sudden proliferation of emails telling other instances of abuses by Malaysian authorities (read: PDRM / RELA) meted on their citizens (especially bona fide Indonesian tourist's tales-of-woe) while visiting Malaysia.

In Tempo’s editorial - another popular and influential weekly newsmagazine -it even highlighted our penchant for calling them by the derogatory term Indon.

Just last week, about 50-stong GOLKAR’s Pemuda Pancasila (PP) - Komite Nasional Pemuda Indonesia (KNPI) - sort of their version of Malaysia’s infamous Pemuda UMNO's Gerak Gempur battalion (who, for some, have likened the group to thugs) descended upon Balikpapan’s Malaysia military attaché office to “demo” and hand over a memorandum. Fortunately, our liason officer here, a Mejar, and a close friend of mine, managed to persuade the protesters to calm down and accepted their memorandum with promises to hand the memo over to our embassy in Jakarta.
The Mejar lamented that I wasn't around to lend him moral support when his compound was besieged. On the drilling barge I was already held in a state of siege myself.
The next day, Balikpapan Post reported on the incident with the headline Arogansi Bukan Budan Melayu (Arrogance is not part of the Malay psyche).
Frankly, being the sole Malaysian in a floating barge surrounded by over 100 seething Indonesians makes me a wee bit jittery.

But really, I have no fear of what can personally befall me. I can deal with that. After all I have dealt with rebel leaders in war-torn Southern Sudan before. Back in ’98 I was chased by Burmese military policemen as I tried to enter the street where Nobel Laureate Daw Aung Sang Syu Kii lives (she was – and still is - under house arrest). I wanted to see what her house looked like. And did I tell you I once had the unfortunate experience of being an overnight guest in a US prison? But all that pales in comparison to the shame I’m feeling now. Shame is something hard for me to take. I’ll take fear over shame any day.

Oh, how can we, as Malaysians, have become so arrogant? 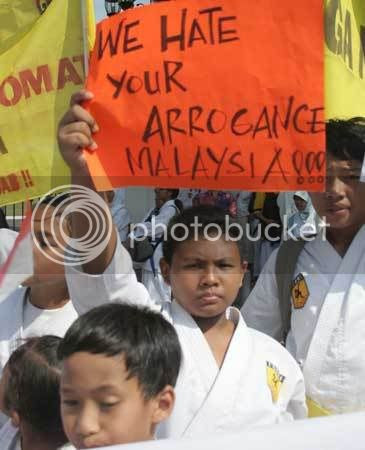 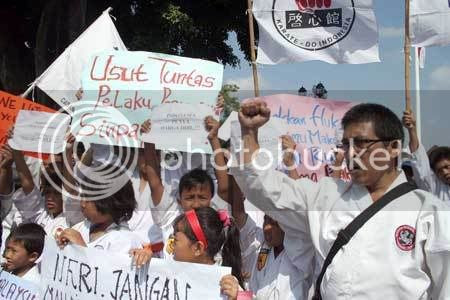 My heartfelt appreciation to fellow Malaysian bloggers Rocky Brew, Elizabeth Wong, Mob 1900, Tokasid and Nathaniel Tan for bringing the issue into the Malaysian conciousness. Please click on the respective links to their blogs for a more comprehensve view.

Finally I will leave you to ponder this Indonesian (written in English) blog that I happened to have chanced upon recently.

Hard to say I am sorry

You know, people say in politics you can spin anything. Not this time, eh Malaysia. It looks bad whichever angle you look at it. Come on.

How do you spin a news about policemen beating up a civilian (who is a foreigner) for no obvious reason?

This, of course does not mean we are saying that Indonesian police is better. But you know, with all the news we read about Malaysia, the economic successes (in relative comparison to Indonesia), we thought things would be better there than here. And many things are: Indonesian GNI per capita for example, is USD 1,280, while Malaysia is USD 4,970. Life expectancy at birth, Indonesia 68 years, Malaysia 74 years [1].

But apparently some things remain the same: Read the comments on Malaysia Today [2] regarding the news. We assume it is written mostly by Malaysians, and you'll see that despite the economy, some things just won't change. Like corrupt public officials. Or abusive policemen.

Some of the comments that attracted our attention (just in case it is censored later on by the Malaysian government):

"The only difference between thugs/muggers and the PDRM is that the former is unlicensed, while the latter is free to hassle the general public. Infact, I truly believe in Malaysia, the PDRM is guilty of more crimes that the criminals. We were taught in school that actually a policeman's role is suppose to be preventive, but somehow that is not the case in Bolehland."

"Don't tell me these policemen thinking that this guy is a foreigner is a good game for robbing (policemen have been known to rob the illegals)"
"In Malaysia we are in constant fear of two groups of people, The Criminals and The Police."

"Years back, the Thomas Cup finals in Jakarta was marred by the unruly crowd. But today, Malaysia has sunk below Indonesia in fairplay & gamesmanship...and the Polis is implicated. IF the Govt. does not stop the rot (at 'the guardians of the law'), the country will be avoided by investors & tourists."

"If Anwar Ibrahim who was then the DPM can be beaten up by the police, who else cannot be beaten?"

We say no more.