The Dumbing Down of the Malaysian Electorate 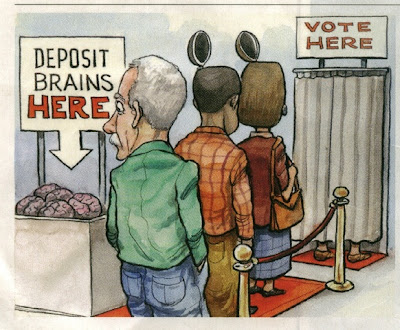 THE ELECTION IS LOOMING close - that much is certain. What is worrying is that the "dumbing down" has begun.

So how do you dumb down the electorate? Why, by controlling what they see, read and hear. The less the voters know, the more "ill-informed" they will be, and this is what some quarters would like to see happen. The media that is already "under-control" will thus be free to put a spin on everything.

Why fear the bogeyman?

Speaking of the bogeyman, if I may digress, I googled the word and what I read tickled me, no thanks to part ancestry on my paternal side. I quote Micha F. Lindemans from the online Encyclopedia Mythica :

Bogeymen possibly come from the "bugis," who were pirates from Indonesia and Malaysia. English and French sailors brought the tales home and anglicized it, telling their children "If you're bad, the bugisman will come and get you!" Eventually, bugis got changed to bogey. (Ryan Tuccinardi)

RPK, as a couple of million of us Malaysians know, is an Anak Raja Bugis (hmmm, the acronym ARB would clash would somebody else's who's in the spotlight too, albeit for very different "crimes"). So, some generations back harried mothers in Scotland and England were using the spectre of this mythical malevolent creature to "scare" their children. In Malay / Indonesian mythology the equivalent would be momok. For the sake of lingual uniformity lets just call our bogeyman, momok.

In the eyes of the ruling party, RPK is indeed the momok. But this particular momok was roaming free all along until someone decided that the general election was near and that the ghosts need to be sequestered. Hey, put that Gin back in the Bottle. Maybe the Scottish mums generations ago and our own beloved mothers were right: If you are bad, the bogeyman will get you. But the warnings of yore was, understandably, meant for children only. Now, by the same logic, you mean to tell me that the ruling politicians in UMNO should fear this momok too? Why? Is it because they are "bad"?

So let us go back to the "dumbing down" premise. Control the flow the information (read: thrash the "negative" articles or websites) and you control the voters. Theres no need for those walking the Corridors of Power to over-react. No worries, man. The voters are inherently dumb, and the politicians, in their hearts of hearts, thinks this is true. Likewise, the feeling is probably mutual: the voters think their politicians are dumb too.

Bryan Caplan, a professor of economics at George Mason University, in his book "The Myth of the Rational Voter", claims, 'In a democracy voters systematically favor irrational policies', adding, 'rational politicians give them what they (irrationally) want.'

Caplan is of course talking about the American electorate. But the voters in the Third World and developing countries are no less dumber too. So we can assume that his theories apply in equal measure here, since we also purport to be a democracy.

Caplan says that 'ignorant voters do not vote randomly'. He went on to theorize the "Four Biases" that makes voters 'demand policies that actually makes themselves worse off'. I like this one: Looks like voters love shooting themselves in the foot.


Anyway, I'm neither an economist nor a journalist. I was just quoting excerpts from Caplan's book which is currently a hit among economists.

I'm almost inclined to think that if Caplan's premises are indeed true, democracy as practiced here, there and everywhere is indeed flawed. Simply because we cannot expect every voter to fully grasp the intricacies of economics and politics. Same goes to the politicians too: they can't be expected to be well-informed. So we're all Dumb and getting Dumber.

So I say to the powers that be, no worries. Just feed the electorate what they want to hear and you have won already. No need to unnecessarily spend the people's money creating anti-blogging comittees and such, just for this one lone Momok.

Unless...unless, of course that the politicians fear that the electorate is smart and getting smarter? (God forbid!)

So now we have it: What the politicians really fear is the voters themselves. Like Caplan's book describes, just tell the voters what they want to hear. Easy peasy. Are voters "feared" because they do not trust their politicians anymore? Is this the reason to clamp down on bloggers - which, by the way, the DPM has subsequently denied?

The element of trust between voters and their politicians is fast receding, and bloggers like RPK, Jeff Ooi, Rocky and the like are to be blamed for helping breach this tenuous link? How so? These uber-bloggers are simply doing their duty exposing the misdeeds of those walking the Corridors of Power.

Is this the reason for the government's unhealthy preoccupation to reign in the momok, or momoks?

The Scottish mums of bygone days were probably right: The bogeyman might get you after all, but only if you happen to be bad.

If you're good, why worry?

I dedicate the post above as my small contribution to Poetic Justice -- 50 Posts to Independence , a project that Nizam Bashir had initiated.

My headache now is who to choose as my "victim". So many deserving Malaysians out there who blog . . . but one of my closest (girl) friends immediately comes to mind. She is, without a doubt, a true Malaysian. I've never met anyone so as "socially conscious" as her. Listen to me. Just get on to her site and you know what I'm talking about. What's more - her birthday conveniently falls on August the 31st!

Here are the rest of the "more deserving" entries: