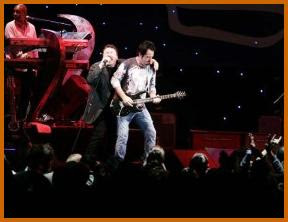 SOME THINGS EVEN A DEPRAVED AND DEPRIVED SWAMP MAN can't have...

I know there's so many things out there that everyone takes for granted (like KJ's ascension to premiership before turning forty is one and Ling Gump's ASSertion that yeah, that guy looks and sounds like me BUT -- is the other) because they're not in some gawd-infested swamp . . .

It's about a concert by one of the greatest bands ever to grace the planet. And it's happening right here in Cyberjaya, Bolehsaja and in two other cities in Indonesia this coming March.

Unfortunately I have to give this a pass but hoping against hope to catch 'em in Surabaya if I can ciluk from the rig that is, but I doubt that --just as as much as I doubt Ling Gump was just tagging along. And the good Tun just happened to bump into him at the airport?

For us Sweet Child O' The Sixties I'm sure there are takers out there. I know Doc TA, Shah Cakapje and a host of other "Sixties Children" will appreciate the chance.

Leland Sklar apparently is replacing Mike Porcaro because the latter has gone on MC or something. David Paich is away in China preparing the theme song for Beijing '08. David is the vocals and songwriter behind Rosanna, Africa etc and has also won an Emmy in '74 for his work on the Ironside theme.

Here's something I lifted off the net about Lee Sklar:

And then there's Greg Phillinganes on keyboards. Greg's fingerwork can be heard on anything from Stevie Wonder (who discovered him more than three decades back) to Eric Clapton, Christina Aguilera, BabyFace, George Benson, Michael Jackson (played on all the songs on Thriller --even Billy Jean), Bee Gees, Carpenters, Dionne Warwick, Paul Simon, Earl Klugh, Chaka Khan, Anita Baker.....Gawd the list is too long! To me, his greatest feat is playing on all of Stevie Wonder's Songs In The Key of Life (1976) especially that lurrrvely Isn't She Lovely? Hal-la-maaak...

Curious, their website listed only three cities in their South East Asian stops; bypassing Thailand, Hong Kong and Singapore even. Now we know those countries got no taste laa...

The rest of their multi-city dates are in Japan and Australia.

Anybody been to Perdana Lakeview East? Is it an open-air venue? And what about the acoustics? Lucky not Stadium Negara, berdegung...

So how? Ada nak gii ker?

If you post a comment and for you Toto fans out there tell me your favorite song. Tough, but mine's "Rosanna" I think. My hair (what's left anyway) stands on end everytime Jeff Porcaro's shuffle beat kicks in at the tune's intro...

N.B. In line with Ling Gump's and other recent sea-change ethical code of conduct in Bolehsaja's blogosphere, the images above were of course lifted sans permission. Whaddya expect?