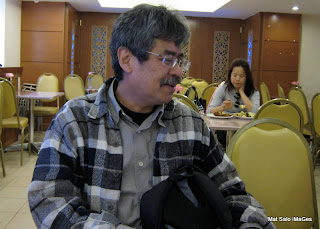 It turned out I wasn't the only one feted by Awang Goneng. Pak Zawi was already there days earlier terrorizing AG's wallet and relieving our confounded host of his Great British Pounds.

Yes, that AG, the famous anok Tengganung, master wordsmith of both English and Malay (albeit of the Tengganung Kite kind), an all around great guy and a thirty-five year veteran of living on English cod and salmon. Apa? Ikang tongkol tok cukup sedap ke?

Awang Goneng, for some reason or other, had decided that Mat Salo was worth his time. My own boss at work once said behind my back, 'That Mat Salo . . .he ain't worth killin'. For AG's selfless random act of kindness . . . I thank him from the bottom of my heart. Thank you, Sir!

Surreptitious e-mails were sent, (again, Pak Zawi had a hand in this), and a note by Kak Teh in this blog soon found me walking to Whiteleys in Queensway where AG would lie in wait at a bookstore (where else?) on the first floor. 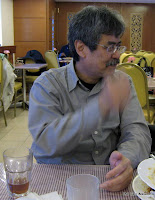 Interestingly, according to AG, Whiteleys is one of the oldest department stores in London, which makes it one of the oldest department stores in the world in my book. As I trudged my tired limbs upstairs - I had been cycling for some days - I happened to pass Lillian Too's Feng Shui shop. It was shut and looked to be out of business. Now, don't you think the Queen of Feng Shui would have known better and sited her store at a more, shall we say, auspicious place? What hope then, for mere Feng Shui deficient mortals like us? 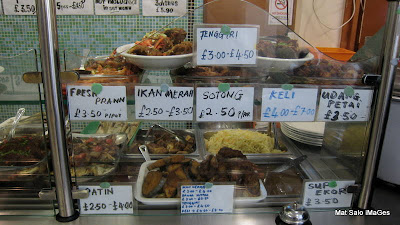 Anyway, the reason he asked to meet there was so we could have lunch at Malaysia Hall, which happened to be around the corner. Now that was a revelation to me because the last time I looked Malaysia Hall was someplace else. But that was twenty years ago. I didn't know it had moved since. 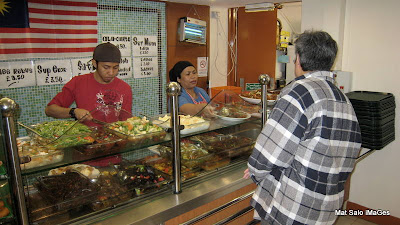 I was a bachelor then, traveling from Malaysia to Aberdeen to attend a week long seminar. The circumstances surrounding my presence at the old Malaysia Hall two decades back was harrowing to say the least. I was there to meet an ex and her newfangled main squeeze, to get - what today people would refer to - as "closure".

I'm not making this up. At the time I hadn't really planned to see her at all. Why should I? After all she had dumped me in a terrifying "Dear Mat" letter some time soon after hitting UK shores. And over a year had elapsed since her posting that "Dear Mat" letter and my sudden, unexpected visit . Anyway she was not in London but in some city up north, hundreds of miles away. But Brother Fate, and its sister Miss Coincidence are about to rear their ugly heads.

Clawing my way from the Banks of the Clyde to Malaysia I decided to stop in cold windy London for the night. Having nothing to do I decided to call a mutual friend, a girl who went to boarding school with the ex, she giggling excitedly over the phone, 'Eh Mat, know what? Your ex is in town with her boyfriend lah. She's on her way over, let's all go to Malaysia hall for dinner tonight - you know where, right? See you there!'

Hah. She's in town! How about that? In a fair, just and perfect world it would have been cause for celebration. But the world isn't round or fair or just. It's horribly flat, square, with sharp serrated edges. No. This can't be happening. But there you go. Brother Fate, Miss Coincidence . . . how do you do?

Now that friend probably doesn't understand the intricacies or nuances of messy break-ups, especially long-distance ones. Perhaps she hadn't experienced any. Or was privy to my fantasies involving throttling and wringing necks. Anyway, those thoughts had long passed and converted to . . . what, I don't know.

To say that the reunion was "awkward" was an understatement. A meeting of ex-es can never or will ever be described as "joyous". Reigning in flat out murderous impulses would be closer to the mark. As I stood there outside the former Malaysia Hall, one hand in my jacket to keep that London chill out, lighting cigarette after cigarette, passed an old VW Golf. Or was it the Rabbit? I wondered (belatedly) if I shouldn't just abandon this meet altogether, for it really served no purpose at all. Except perhaps, to tear old wounds.

In the rusting blue VW was our mutual friend driving, carrying inside what once held my dreams, hopes and object of er, lust. And not forgetting too beside her, hands on thigh probably, was The Guy who helped take those whimsical notions away.

It took a while for them to show up at the entrance, and it wasn't for lack of a parking space. Perhaps they needed to huddle down, figure things out at this rather unexpected entrance by Mat Salo, stage left, blindsiding them. To them perhaps, I was some kind of monster, a jilted raving maniac of some kind, bent on retribution. And they may be right. Anyway it was the girls who appeared first and true to Mat Salo's form, pretended like there was nothing ever between 'em, just a meeting of some old flames, er, friends. The Guy, they said, would join us "in a bit".

"In a bit", huh? Now how about that kiddo? Got cold feet?

Eventually Adonis, God's version of the perfect male form, came hurriedly in from the cold like a surreal scene from a Peter Lorre movie; scarf flailing, eyes shifting, looking nervous. Being the older and more mature guy, a cool and calculated Mat Salo turned up the charm (until the knob could go no further or else the potentiometer valves would blow) and set about putting The Guy at ease, joining him for cigarettes while the girls go inside to order food . . . and to gossip perhaps at the scene about to unravel outside? 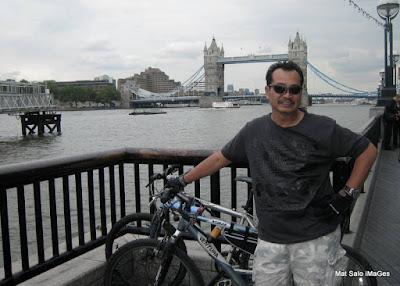 'Fraid not, he's not the Adonis.
Sorry to disappoint but there was no scene "about to unravel" outside. We'll me and The Guy won't ever be buddies, that's for sure, but at least there was a semblance of civility. The art of conceding defeat, being a gentleman, that sort of thing, part of being a man in a woman's world.

For the life of me I don't remember his name or what happened to him eventually but I do know that the ex, after getting her Bar and a stint at LSE, went home, met a Mat Saleh bloke and eventually became an American. Perhaps it's fitting that I eventually met the woman of my (real, rational and practical) dreams, married her and became an Indonesian. That's a joke, by the way.

Bloody hell, and I thought we were supposed to be talking about AG here . . . and how did my post get mixed up with trips down memory lane? 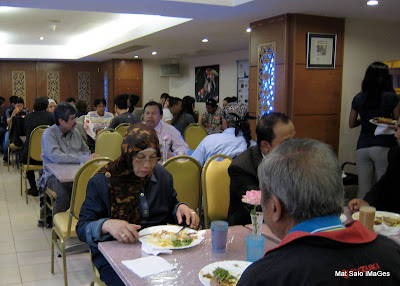 AG and MSD's deputy director, on his left. 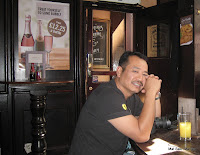 Some photos of me and my boy below, occasionally finding ourselves lost. Real men, they say, don't ever ask for directions. Not ever. They just blow 200 quid on some gadget called Garmin, and still can't find their bloody way home.

Seriously, part of the fun of travel is getting lost. But don't tell that to the spouse who pre-approved the Garmin purchase at John Bloody Lewis, eh? 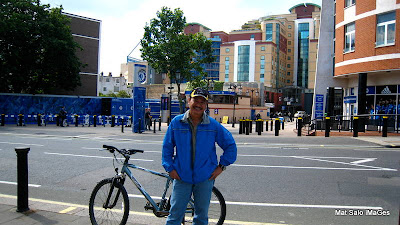 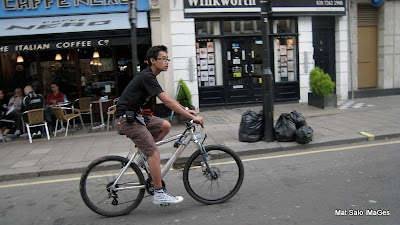 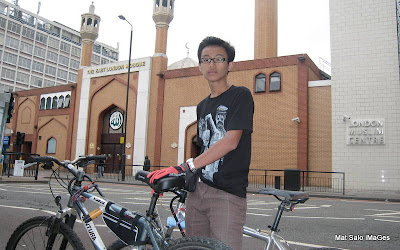