An Evening In Africa

Between A Gated Community and a War Zone 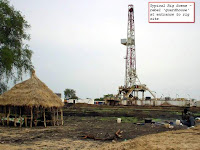 It was 6.00 p.m. on a Tuesday on a hot African bush evening. I was smoking outside my container office, eagerly waiting for the food to arrive, and along with the food, two of my crew and fresh laundry.

I was but a few hundred kilometers from the borders of Uganda, Kenya, Congo, Central African Republic and Ethiopia, in the southern-most corner of Sudan.

As a “key personnel”, I was required to be on site, but the rest of the crew lived at the ‘camp’; the ‘camp’ being 10 km away on a bone–jarring ride by pick-up truck. The container cabin at the rig where I was sequestered is comfortably equipped with bunk beds and a shower. I share this cabin with my Romanian colleague Ciprian (pronounced Cheep-ri-yan) who is, in rig parlance, my night guy – taking care of activities between sunup and sundown.

The date was 2 August 2005, and I had no inkling that ‘war’ had already started.

My uncouth oilfield brain would later say, hey, this is interesting, how often does a middle-class Bolehsian get to experience being in a war zone, and in the dark corners of Africa at that? 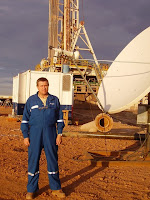 Ciprian and I stood uncomfortably swatting mosquitoes while chain smoking cigarettes in a pathetic attempt to additionally thwart the agressive mozzies away. These are not your run-of-the-mill mozzies, no sir, but killer ones guaranteed to cause malaria; they are also more persistent and a shade bigger than you find in Bolehsia. Thwack! I gave my face a sharp slap but missed the damned mozzie. So what else is new? And where the hell is that pick-up?

Ususally the pick-up would arrive by a quarter to six carrying our two north Sudanese (a distinction is made here, northerners are invariably Moslems) crewmembers, along with our food and clean laundry. Occasionally, the clean laundry and food would go ‘missing’, and for the latter I will be forced to pry into my emergency ration of Yeo’s Curry Chicken or Maggi Mee, whose stock was already fast dwindling.

As we stomped the finished cigarette with our steel toes, only to immediately light another one with 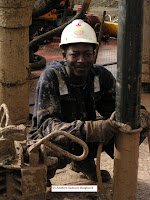 my Zippo, the tell-tale dust trail in the distance beckoned. Finally, our empty bellies would soon be filled by some bread and beans! A note about the bread here: Some client rep once remarked that if you throw that offending bun at a dog’s head with sufficient force, you might invariably kill the poor canine – it was that hard. I was also eager to eat quickly so I can rid the red dust of my coveralls and have my dirty laundry sent back to the camp. I was left with just one pair of coveralls, and if I lose any more I will then be reduced to wearing jeans and t-shirts - which will look silly on a drilling rig, not to mention unsafe.

Presently the red pick-up (originally white) came to a halt. My empty gut told me something was wrong. Our driver Hafiz, a Darfur native or thereabouts, stepped out with an expression bordering on fear. My two crewmembers Ma’mon and Bashir stayed rooted in the rear seats. As it was already dark, it was hard to see their faces.

Hafiz, our driver, cut to the chase.

“They cannot stay in camp, boss, just now Ma’mon got beaten in the galley while eating dinner,” the words came tumbling out in sing-song African lilt.

What? Looting? Burning? I heard myself thinking; no wonder I couldn’t reach my boss in Khartoum last night.

I rushed to the rear doors. Ma’mon looked forlorn, his large African chiseled head nestling in his hands. Bashir, the quiet one, just stared ahead, as if in shock. I opened the door, and Ma’mon slowly raised his head to look at me, his eyes red from crying.

“I’m scared . . go back to camp, boss, the bloody Christian workers want to kill us …” his voice trailed. “OK man, go inside, go relax in the container”, was all I could say.

He looked none the worse for wear, for someone who was ‘beaten’ I mean, and except for a few scratches and the scruff coveralls, torn near the pockets, he was, in my estimation, probably just a victim of some spirited pushing and shoving. No harm done, I thought. But still I needed to quickly evacuate these two North Sudanese back to Khartoum just the same.

The capital, being a thousand kilometers away, is served only by an air charter service provided by our client. The dusty airfield (well, it gets muddy if it rains, which is often) is about 30 kilometers away, so I needed to contact my bosses in Khartoum to get the client to send in the twin-propeller Beechcraft.

I later found out that all civilian aircraft in Khartoum was grounded.

I went inside the container office and grabbed the ‘Thuraya’ satellite phone. My hands were shaking, and I even failed to notice that the pick-up was bereft of packed bread and beans. Worse, I also ignored my gnawing hunger. I quickly scrolled down the address list and hit ‘Call’.

“Come on, pick it up”, I cursed under my breath. A few attempts later my boss’s high-pitched wail crackled in. He tried to hide the panic in his voice as he explained that he was holed up in so-and-so apartment, and that the office would be closed until further notice. Martial law was already declared, and he dared not even go back to his apartment as the news reports there said his part of town was the worst affected. They were already deaths in Khartoum. Yes, yes, I know all that, I replied, but he quickly hung up.

He was holed with three families with crying spouses and infants in that so-and-so’s apartment meant for just one family. He was also having tough time, he claimed, and if that was an understatement, I don’t know what is.

In effect, he more or less told me I was on my own. Time to take the bull by the horns, I muttered to myself.

Moslems versus Christians, North versus South.

To be honest, flashes of scenes of the gated community I lived in Bolehsia did pass by me; scenes of my then twelve-year old and four-year old boy happily playing in the park straddling an odd-sounding place called The Curve. And my darling and eternally suffering wife, coming home from work, stopping at the park to take the boys home. Never in wildest dreams did I consider not being able to see them again.

The workers on the rig, being mostly of the Southern Christian variety, a sub-Dinka tribe that Garang belonged to, were all ready to revolt. This was after all, their territory.

Drilling was suspended, as the roughnecks refused to go the rig floor. Ciprian and I climbed up to the floor to see if we can double-handedly continue the drilling operations. But the headlights of a familiar pick-up bearing the SPLA sub-commander was making its way to our site, replete with a heavy caliber machine gun looming menacingly in the rear, causing us stop mid-way up.

I knew the sub-commander would be looking for me. 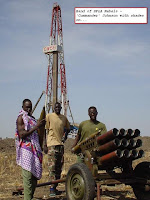 The reason we had a 'relationship' going was because I had a portable satellite phone. Indeed, a most valuable commodity in the bushes of Africa. And he was probably just as lost as I was and needed to find out from his rebel commanders up the hierarchy as to who would fill Dr. Garang’s big shoes. And what the next course of action will be. Slaughter all the foreigners on the rig, perhaps? How about holding them hostage for hard currency?

In the course of our ‘friendship’, Commander Johnson as he liked to be called, had many times been at liberty of sampling my cigarettes and whisky (ho, ho the latter is used a ‘bargaining chip’), and the dollar-a-minute phone of course. Not too mention the tons of bottled mineral water for his goons. 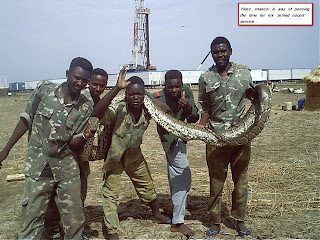 The Commander's goons goofing off...

Commander Johnson, in my book, is one of the good guys. My bleeding heart will always give ANYBODY the benefit of the doubt, even if they were to show up with rifles and side-arms.

Now this is dicey, for I claim to be Moslem, and Commander Johnson knows this. But the good Christian Commander also knows Mat Salo is a ‘good guy’ (hopefully the feeling is mutual). Now as I walked to his battered truck, I needed to get Commander on my side more than ever.

I noticed he still had his shades on, even when it was well past sundown.

Without much preamble, I handed Commander Johnson the phone. I was sweating bullets, I admit, but forced myself to slow my movements, in an effort to show I was relaxed and without a trace of fear. I didn't want to give the good commander any 'ideas'. But honestly? Where it matters most, they 'jewels' had already shrunk on its own accord.

I needed to ask him a safe passage for my two North Sudanese engineers to Heglig, where our base sat eight hours away in the safe cocoon of Government (North Sudanese) control.

I gently coaxed him to provide armed escort for my crew to the so-called ‘demarcation’ line, about three hours away. As ‘head’ of my cell, I was already doing a couple ‘CYA’ motions to comply with my company’s extra-stringent ‘journey management’ policy. The manual stated, a trifle bit ambigously, ‘ ensure armed escort for personnel movements'. But it failed to specify from which 'side'. As long as the 'escorts' are armed, that’s good enough for me.

Right away I saw the irony, and possibly the folly of my quest.

And again, scenes of the guardhouse of my Bolehsian gated community flashed before me.

Imagine then, as an asinine analogy, the Residents Association of the housing estate convening a meeting. The security company that the residents employed has absconded, because one of the guards was badly injured in a scuffle for thwarting a robbery attempt. And the break-ins, which have been going on too long already, so they decided to deal with the devil. Thus the ‘thief’ was now called in to provide security. It does nothing for their piece of mind, I tell you, but in terms of performance, it does wonders. No more break-ins at the gated community.

And that was exactly what I was doing, negotiating with the ‘devil’.

But ah, this is the devil I know, and sure enough, a few ‘swigs’ later, and a carton of Chinese cigarettes to sweeten the deal, Commander Johnson agreed for a pick-up to chaperone the ‘valuable assets’ of a multinational oil service company, for evacuation to Heglig the next day.

Thus the insidious seed was planted in my idiotic nether region that I was never going back to that hole in the wall they call Africa.

I miss my ‘gated community’ too, too damned much, and all it contained there-in.


And that was how I found myself in the boondocks of Borneo not too long after. 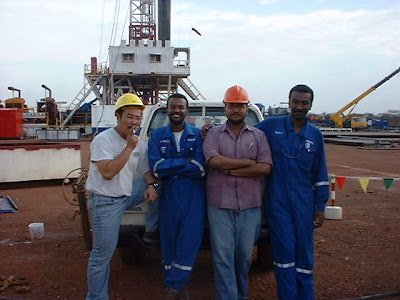 In happier days, when Dr. John Garang was still alive and Mat Salo without a care in the world . . . Again, no prizes for guessing which one's Mat Salo (hint: he doesn't claim to be a non-smoker)