Mutiara Damansara, Monday (matsalo/asp). What a hectic week it was, running around first over the “rampok” incident, talking to the police, and replacing bank passbooks and such, and later to organize with the Sheikh (who was very kind—God Bless him--to loan his premises as the venue) a mini-doa’ and tahlil session to bersyukur over my wife’s 7th month successful pregnancy (so far, Insya'Allah). It was also an excuse to bersillaturrahmi with some old friends which I’ve had the pleasure of knowing for some 30-odd years. 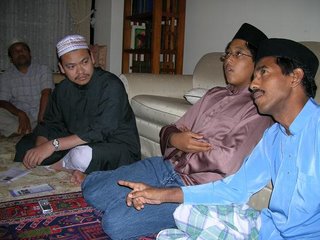 All things considered I was lucky indeed, and I am grateful to the Almighty for His Benevolence and continuing protection always.

The Sheikh had invited Uztaz Zaharuddin (http://www.zaharuddin.com/) for the tahlil session post-Isha prayers last Friday. It was actually a mini-sermon and NOT the usual doa’/tahlil events that most of us Melayu Muslims are accustomed to. 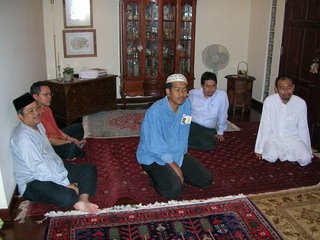 As the good ustaz mentioned, there are two ways to hold a zikir. One is the traditional way and the other is a sermon type. I’m very happy to note that the latter is gaining popularity. The problem with traditional tahlil session is this: The moment someone invites you to come over to their house for a tahlil, the first impulse is to look upon the invitation with some sort of disdain. A heavy heart, yes? Well, I understand perfectly.

The problem is a lot of tahlil sessions done the usual way can be construed to some as boring, I’m sorry to say, but it’s true. But what if we call in a distinguished speaker, an expert in a particular field, say Syariah Compliance in Islamic Banking for instance, in a very informal setting? Now I’m sure this would be more palatable to most. You can even eat finger-foods, drink tea and smoke (check with your host first of course, if the smoko permit covers the interior of the venue) while listening in rapt attention on subjects you are likely to be ignorant of: Islamic Jurispudence, The Seven Deadly Sins, Syariah laws, whatever. Now this would be interesting wouldn’t it?

Needless to say, I am most impressed with this type of session and I’m even going so far as to suggest we hold something like this more often, say maybe once every two months, and we rotate the venue. We could even chip in to cover costs. It would be a Distinguished Lecture Series like they have in Universities but in a very informal setting, minus all the pomp. So I expect someone to carry on the torch and I hope to hear some positive response soon. 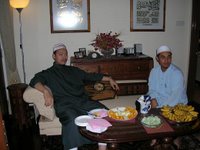 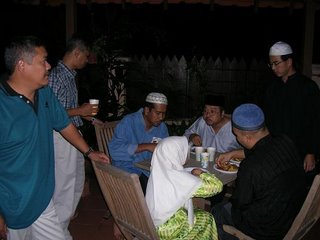 My HairStylist, My Spiritual Advisor


I was happy to get my hair toussled again by none other than fiftysomething stylist par excellence Mr. Harun Enduk. It has been quite a while since I last saw him because he had had an extremely busy year. In case you didn’t know, Harun was the official Stylist for last years’ Akademi Fantasia working his magic on Marsha's and Nikki's tresses, and was also in Secret’s (a deodorant I think) Beauty Search TV show. In the eighties he was Stylist to the Stars like Sheila Majid. He also has his fair share of Bollywood Queens too when they come to Malaysia for a shoot. Harun owns the Crimpers outlet along the main road in SS2, Petaling Jaya.

I’ve been close friends with Harun for more than a decade already, well, almost as long as I’ve been married (he styled my hair for my wedding). But what brought us together was since this fiftysomething bujang terlajak hails from Dungun, we had a lot of mutual friends. Some of the people that I work with in offshore Terengganu were Harun’s classmates.

Harun’s beginnings were most humble, starting as a caddy in the Dungun Golf Club in the very early seventies. A lot of Dungunites think that if he had taken golf seriously, he might’ve even ended up like Vijay Singh! He has the physique though, almost six feet, and still very fit. He tells me he still goes to the gym in Bangsar thrice weekly. If you didn’t know it, he looks more thirtysomething than fifty! By the way, when we were in high school, Harun used to grace the pages of local magazines as a model for Levi’s on account for his rather nice posterior. Now don’t get any ideas about this “nice posterior” business, wokey?

Anyway he had some bad news for me in that his younger brother “Ali John” passed away some two months back. Innalillahiwainnalillahirrajiun. Ali John was a mere acquaintance but we’re of the same age, the arwah maybe just being slightly older. He leaves behind a wife and two small children, the eldest daughter being in Year One.

He had married late (close to forty) and only discovered the heart ailment a few years ago while undergoing a gall bladder operation. At that time he was employed as a safety officer with a small contractor in Paka. After going in and out of hospitals and IJN, he was thus forced to resign. I heard the company that laid him off was wound up recently. Lucky for him his wife had the foresight to uproot the family and move to Gombak where she got a job as P.A. to a Petronas senior manager. The relocation was also to facilitate his frequent visits to IJN. Alas, it was already written in the Book. I apologized to Harun for not being able to come for his tahlil though.

For those of inclined to see any “Brokeback” related issues in my conduct with Harun, look no further. There are none, as we are just good friends who value each others' counsel. I dare say, he is in a way a form of “spiritual” advisor to some as countless women will agree. You know how women can spill their innermost thoughts to their personal hairdressers? Strange but true. Why can’t these women approach a respected Imam or Tok Guru to tell their troubles? Why? Is it because the Tok Iman will tell them that they’ll burn in hell forever for their transgressions?

I’ve often joked with Harun that his job is something like the Catholic priest one sees in the movies in a “confession” scene . Except he gets to play with their hair and it doesn’t occur in some dark, claustrophobic booth. Harun speaks excellent English, a damn good listener, and above all wise from listening to so many human-related issues. I do envy him a bit though because I really wish to be the person that a friend or family member can turn to in a moment of crisis, self-doubt and trouble.

For me this would be the ultimate accolade.

In an upcoming episode, I will relate how a 55 year-old card-carrying PAS member-for-life, thrice-haji-ed and in the process of memorizing the Quran (Hafidz), came to ME (yes, you heard that right) to seek counsel on personal issues like whether to divorce his wife of some thirty-years or even to disown the eldest daughter.

Incidentally, he spends at least RM 50,000.00 annually for related good works (Tarbiyyah) on top of compulsory Zakat. He recently became a pensioner but now consults with Petronas Carigali.

With the wise counsel of the Grand Sheikh, I have told this elderly gentlemen to seek Dr. Harun Din's help.

No, not me, no sir. I’m not even qualified to boil water to cook maggi. But there’s something to be said about a person’s approach, I suppose. He was forced to seek my view because he had gone home only to beat his wife for the first time after consulting a “Tok Guru” about his marital problems. So how? Mat Salo sure ain’t no preacher man for sure, but I’m not going to recommend anyone to go home to beat their wives or wayward kids. Or disown allegedly straying daughters who just decided to rebel by not wearing the headscarf any more.

Tune in for more titillating commentaries next week folks. I guarantee thee...things can only get racier eh?