A pall has descended over Yani.

Yani is the rig I work on and is owned by Ariffin Pinogoro, who appears as # 9 on the latest Forbes list of “40 Richest Indonesians” with a net worth close to 1 Billion gawd-almighty US dollars. This time around, even Liem Soei Liong of the Salim Group had to contend with 10th place.

The offshore rigs are named after his sons and daughters. Yani’s other “siblings” include Raissa, Raissis, Maera, Raniworo and with the latest one, a super-premium jack-up called Soehannah –sons and daughters of a true blue US dollar billionaire.

Anyway this isn’t the point of the story. My previous post told of an accident that happened on Boxing Day, the day after Christmas. At that point the denizens of Yani were still optimistic of the New Year’s rig party. Apparently, a down payment of a million rupiahs was already handed to the ‘electone singing group’. I was mistaken. There were to be four women, not just one; an organ player with the other three singing / dancing and were originally scheduled to be smuggled in on New Years Eve.

Sorry to disappoint you but there was no new New Year’s Party. In fact, I slept through while revelers in Malaysia were gathered watching taxpayers money dissipate via fireworks. The party was canceled on the morning of the December 31st, and this time everybody was in unanimous agreement.

At 3.OO a.m. on that fateful morning (I was asleep and oblivious to the violence that unfolded) an altercation broke out with a roustabout and his leader, whom we call “headman” (mandor in boleh-speak). The roustabout did the unthinkable: he pulled a knife and chased the poor headman before being restrained by fellow roustabouts. The Major (rig liason officer) had to be called in and within fifteen minutes the marine police had come aboard brandishing side-arms and machine guns.

Pak D---, the perp, was the quiet sort. Even after two years being on the Yani we hardly exchanged words. But he was always glad to accept my occasional gifts of Sampoerna Mild kretek cigarettes though. But I never thought him as someone dangerous. Another myth broken; goes to show Mat Salo’s not such a good judge of character after all. . .

Anyway that violent interlude was the final nail in the coffin and put paid to our New Year’s bash for good. Bosses from town had to descend by slow-boat (choppers weren’t running on the 31st) to do their damage control. With the police and management folks swarming around you can forget about the party. They’re pissed-off already since this has spoiled their New Year’s holiday…

But again this isn’t the point of the story. The point is our colleague Agus Untung was called to the lord, at this morning in the bosom of his family. He was on his days off. He was 38 years old, married with two children, and with no known ailments. He doesn’t even drink coffee or smoke.

Tomorrow, Saturday the 5th, would have been his crew change day when we were supposed to trade banter again.

But it was not to be, Pak Agus yah? 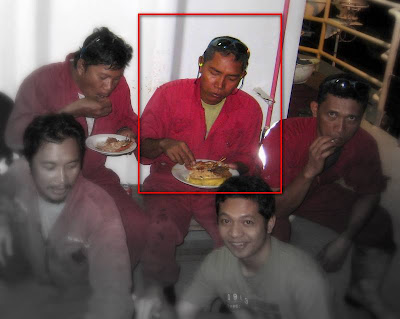