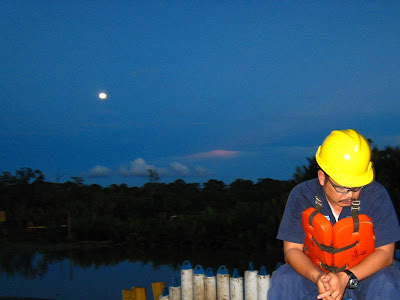 When I began my day this morning my thoughts were drawn to my beloved homeland, Bolehsia. I was wondering what my two boys will be doing today, aside from hogging the PS2 and PC - while testing the patience of my eternally suffering wife - because today, May the 1st , is a public holiday.

And the boys will be at home.

Because it's Labors' Day holiday in Bolehsia.

And I'm on a swamp barge rig, on the eastern edge of swampy Borneo - and it's business as usual, of course.

But Indonesia doesn't recognize any form of Workers' Day, and so my thoughts were then drawn to a brave young woman called Marsinah, now dearly departed, who once walked the earth in a place called Sidoarjo in East Java.

Sidoarjo came into the news recently because of the huge ecological disaster allegedly caused by irresponsible drillng practices by a company called PT Lapindo Brantas, in pursuit of the Holy Black Gold. Overflowing hot mud caused 15,000 families to be displaced; some killed, flooded 600 hectares of land and submerged whole villages.

I'd like to think that the disaster was God's Wrath - a retribution for Marsinah.

In case you don't know who Marsinah was, here's an excerpt gleaned from an Amnesty International Report:

" . . . . Marsinah's body was found by a group of children in a shack at the edge of a rice field some 100 kilometres from her home. It was bloodied and covered in bruises. There were strangulation marks on her neck. A blunt instrument had been thrust into her vagina causing terrible injuries. A few days earlier she had been a lively 25-year-old leading a strike at the watch factory where she worked in Porong, Sidoarjo, East Java, in Indonesia. She was brutally murdered, almost certainly by the military, because she was a trade unionist who stood up for workers' rights . . . "

And all that she did in '93, this poor young woman, was to sit down with her employer to demand to be paid as was what was on their wage agreement. No more or no less. To demand what's rightfully hers and for her co-workers.

In '98, Ratna Sarumpaet, the famed Indonesian playwright, was thrown in jail in for daring to stage a play on Marsinah.

To this day, the ban on the play is still in effect.

While I leave you to enjoy Labors' Day holiday with your loved ones, O' my Bolehsian readers, spare a thought with this translated monologue from the play by Ratna - Marsinah Accuses.

Then I heard a door being opened right in front of me.
I don't know whether my head hit the wall
or whether I was hit on the brow with a club
I only know I fell headlong on the floor ...
When I tried to move, feet in heavy boots
quickly restrained me, standing on
my shins, my belly, my chest, my arms ...
I was abused with streams of filthy words

during every torture that followed,
I don't know how many times my body was lifted up,
then smashed down, hard.
Lifted up again, then smashed down again ...
Onto the floor ...
Onto the corner of a table ...
Onto a chair ...
Until at last I was truly helpless ...
Such brutality knows no satisfaction ...
I could no longer even move my fingertips
when they began to wildly grope my whole body...
Ratna Sarumpaet, excerpt from Marsinah Menggugat - A monologue from the banned play.