The Last Blog (Of The Year)

Out with old, in with the new.

Oi, I ain’t talking about wives here, oh no, no sir, can’t have that

can we? It’s just that New Year’s Day is tomorrow and I’m on the rig. Yes, I was already here a week before Christmas. On most drilling rigs each New Year’s Day will be like any other. Why? Because rigs are costly 24/7 operations, so there’s no such thing as weekends or public holidays. If there happened to be a public holiday on your “Days On”, well, tough luck.

Having had my more-than-fair share of celebrating all kinds of festivals on rigs in Vietnam, Thailand, Myanmar, Japan, United States and Sudan – well…in Indonesia it’s a little different.

this era of mergers) takes extraordinary pains to endear themselves to the citizens of the countries they operate in. Unlike rigs in other parts of the world (Islamic Malaysia's Petronas included), each Friday an Imam will be sent out to lead us in prayers. The Imam is actually an employee from Total’s very own ‘Religious Department’, and I was surprised to learn that he is also an Islamic Studies doctoral candidate sponsored by Total! Apparently there are quite a number of these scholar-Imams for Total’s various offshore facilities and installation. In Malaysia, the Imam on an offshore installation would usually be a fellow employee, albeit the more ‘pious’ one.

Our rig really hasn’t a proper space to conduct Friday prayers for the about 30-40 attendees, so the recreation room gets ‘converted’ by

shifting sofas, chairs and TV sets around. That same recreation room will also host the Christian Prayer Meet later in the evening – with another Total-sponsored Priest in attendance. As soon as we exit the small 5m X 5m room after the Friday prayers, the carpets and prayer mats get rolled-up to make way for our Christian brethren to set up their mini-keyboard and guitar. Imagine how much money we can save if we were to have this in the real world eh? By sharing mosques, churches and synagogues, I mean.

But that’s not the half of it. That recreation room was also the venue of the rig’s recent Christmas party. Total being a more enlightened operator, ordered beer and liquor for the occasion. Just so you know, alcohol is strictly off-limits to oil operations everywhere in the world with Total the glaring exception (especially offshore), since it involves a Major Safety Violation in a Hazardous Environment.

But here’s the thing - the Total Client Rep and his Assistant, both practising muslims (the Rep being a Hajj to boot) was invited to 'officiate' the ceremony. I thought it odd that the Hajj Rep, 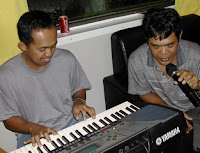 whom we affectionately call 'Pak Aji' (honorific term for those who has performed the Haj) came in the room wearing a 'Bir Anker' T-Shirt. Most of those present were Christians save for the Rep and his Assistant, the Keyboard playing Crane Operator (who just happens to be our Bilal), the Camp Boss and me. I can only manage a wan smile at the inappropriateness of the situation, especially with the Hajj Rep starting his mini speech with an Assalamualaikum - presiding over crates of Bir Anker and bottles of Johnny Walker Scotch on the dais where our Imam usually delivers the sermon. I was half-expecting him to quote verses from the Koran.

Only the Rep’s Assistant understood the ludicrous farce playing before us, because he looked straight at me and rolled his eyes. This room – our musholla – now the site of so much free-

flowing liquor and dangdut-style dancing by the inebriated off-duty rig crew, suitably encouraged by our resident Crane Operator / Keyboard Player-cum-Bilal, and we both slowly shook our heads in amazement. Bir Anker T-Shirt joined in the fun too (no, he did not touch the liquor I mean) in a show of solidarity. Of course he prodded me to follow, and soon I was dancing along good-naturedly with all and sundry; the room boys, cooks, roustabouts and roughnecks. 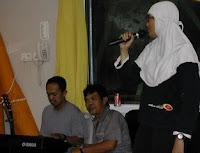 Incidentally, the Indonesians call this ‘bersilatulrahmi’; spreading cheer and goodwill - sort of like a team-building thing. And this is what endears me to them, the free mingling of people of different faiths within the same ethnic group. Really, try as I might I detected no animosity between them. But I can’t imagine such a scene such as this in Malaysia, and I suspect I never will. Besides, it’s hard to find a Malay Christian in Malaysia anyway…