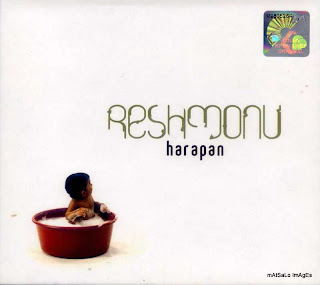 If you have tuned in to our local stations when you make that daily grind to the office you most probably have heard Oh Anok Anok right? Yeah, that's the one, the catchy Kelantanese-inspired anthem. (Click for the MTV youtube video)

That's by Reshmonu and the lyrics are by my beloved, multi-talented sister, Pacha.

His first full-length Malay album has just made it to market, folks, with Pacha penning most of the lyrics. Pacha had also written his award winning 2004 hit Cintaku Pergi.

To order the CD, please go here. It comes with a nice denim CD "sock" by Key Ng.

If nothing else, proceeds from my sister's royalties will go towards me taking you guys out for teh tarik, eh? 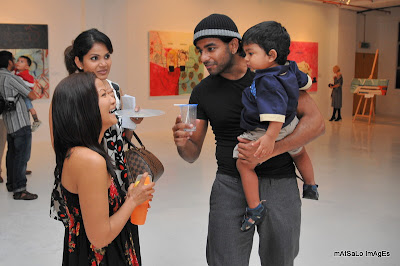 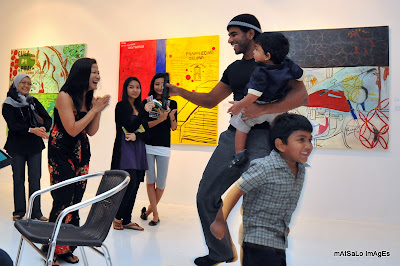 Hiresh with my sister at the opening night of her first solo. In the background is my niece N and partly hidden by Resh's mic is A, niece of both Kak Ton's and Nuraina's. 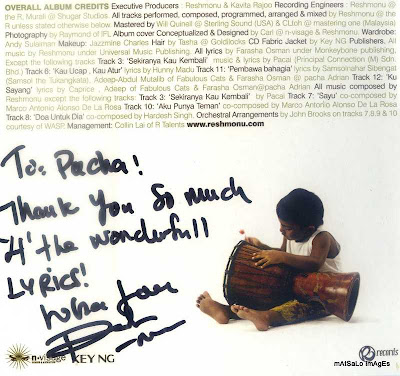 I ‘m overwhelmed at the fact that this first malay album of mine has earned a place among a majority malay music industry. I am humbled that it has earned its recognition among my fellow musical comrades…my only hope now is that ‘Harapan’ reaches you… my supporters! (available exclusively @ www.rrecords.net
) Would love to extend my sincere gratitude to everyone involved directly or indirectly in the production of ‘HARAPAN’.
BTW: With regards to the release of my next English album…mmmm???? All I can say is somethin’s cookin in my music kitchen!!!! (hint:- Soulfull Funky House music in session!). 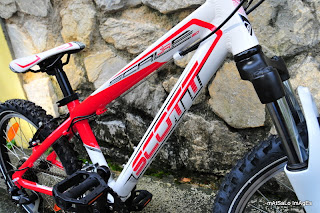 My boy turned 8 yesterday, and he also came out 3rd in his term exams, so what did I do to reward him amidst this raging recession and BN's recent humiliating loss? (Is this Perak's and Kedah's "gift" to the newly-crowned First Lady?)

I bought him a scaled-down replica of former world champion Thomas Frischknecht's race machine: A Scott Scale JR 20.
The "20" means twenty inch wheels when adult-sized bikes are 24 inch. So it's a kid's bike. But a serious kid's bike armed with Revo Shifters, front and rear derailleurs,front fork with 55mm travel, the whole works.
Come visit my other blog for more of this insanely inane, stupendously mundane and lame ho-hum stuff. 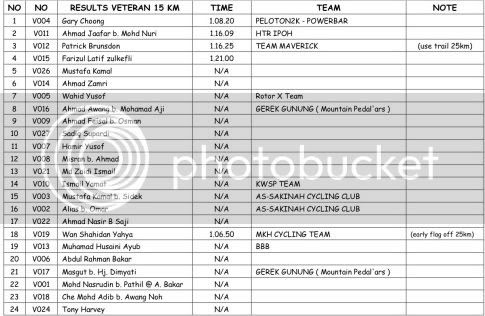 Damn the organizers, or praise 'em, rather? - because the official race classification came in almost a week later!

This is something akin to what happened to Jarno Trulli in the opening F1 season on the same day as my race. Lewis Hamilton was eventually disqualified from his third placing and Trulli bumped up to third from fourth.

Apparently legendary Pat "Pig Pen" Brunsdon (V012) and "Ironman" supremo Wan Shahidan (V019) had jumped the gun. In Pat's and Wan Shahidan's case, there were so gung ho on starting (a bit like being kiasu laa) that they started off at the first flag-off in the Open Class.

They were supposed to start off with us, about 10 minutes after the Open flag-off. It was a bit chaotic I suppose since there are hundreds of us jammed on that small lane waiting for the Pajero to lead us on a rolling start. The Pajero had some dudes in the rear holding a huge Selangor flag ready to "drop it". So these two decided to trail the Open pack I guess, thinking the Vet class race was going to be on a slightly different and shorter route. In Pat's case the marshalls made him go on the longer Open Class route (see note above), Buy why Wan Shahidan was positioned 18th I wouldn't know. He must have committed a bigger sin like failing to pass a checkpoint (shortcut?) or something when he actually had the fastest time.

In any event I'm a happy puppy.

Like everything else in life, we should play by the rules and hope to "get lucky" sometimes.