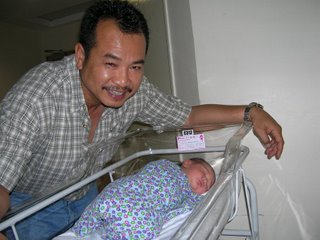 STOP THE PRESS! Kuala Lumpur, Tuesday 16 May. After two boys--13 and 5--year-olds, Mat Salo ('Overprotective' Daddy and his Lil ' Gal, pic) was once again blessed, this time with a much-awaited baby girl, who has yet to be named at press time.

"Don't worry", Salo assured everyone, "the baby's special, so she'll have a special name, Insya'Allah". Both mother and baby are reportedly doing fine.

Next to TomKats 'Suri', and the yet-to-be delivered Brangelina offspring rumored due on May 18th, this was the most anticipated Baby-of-the-Year Event (according to Mat Salo, of course!).

An ecstatic Mat Salo was especially grateful since the Doctor had 'made it back in time'-- but barely-- just two days after returning from performing the Umrah in Makkah.

"For a moment, I thought sure dah kena back-up Doctor dah--Dr. Derih [Idris]-- but I guess the baby decided to wait for Dr. Hamid. I also bersyukur-lah that I had just managed to come back a week ago from work in Indonesia", added the happy daddy.

The mother Puan Sity Suriani (Sue) was needless to say, joyous too.

Two years ago she sufferred an ectopic pregnancy and had to have a fallopian tube removed. There were doubts as to whether she was able to conceive again. Even so, could she have a 'normal' delivery after undergoing surgery less than two years prior?

The doubts were gratefully, put to rest.

She had undergone the emergency procedure at Damansara Specialist after being admitted for 'extreme stomach pain'. Fortunately Mat Salo was at home at the time, and neither one had known that she was pregnant. There was no time to seek a second opinion even. The 'embryo' became 'stuck' in the tube and had subsequently 'burst' . This was what caused the internal bleeding and acute pain. Dr. Maziah*, the O & G physician in attendance who performed the emergency surgery apparently did a great job. Because Puan Sity was able to have a normal delivery two years later.

And that is why, folks, this girl is special. 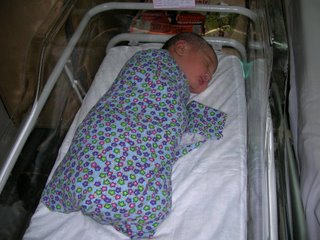 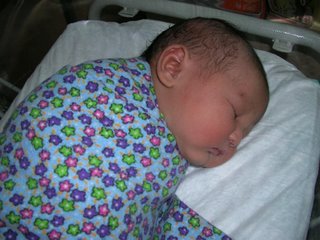 AS Mat Salo would have his hands full with the 'new girl in his life', he regretfully declines any invitations to 'Teh Tarik' sessions and Friday Nite Futsals, or other similar activities until further notice. He welcomes calls and SMS-es from well wishers though. At the moment, he's holed-up in Room 312 for at least another day or two, where fortunately, there's Wi-Fi, and Astro.

*To keep up the '6 degrees of separation' spirit, Dr.Maziah's husband, a brain surgeon, just happens to be Mat Salo's senior in high school)