Pak Lah apologises to SBY, IGP Musa writes an apology to Donald, and Donald says sorry to ME?

I AM NOT PULLING anybody's leg here. He really did say sorry to me, Mat Salo.

A year ago, Pak Lah, as was widely reported in the Indonesian media, had personally telephoned Indonesia's president Susilo Bambang Yudhoyono to convey his deepest regrets. Not to be outdone, IGP Musa Hassan too had written a letter of apology that was delivered to Donald at his Jakarta hospital bed via Malaysia's very own ambassador. And Donald, in turn, had actually said "sorry" in an SMS to me yesterday, the 19th of July.

Well, apologizing for not being able to meet for a private interview, that is.

To refresh your memory, a year ago Pak Donald was beaten senseless by Royal Malaysian policemen outside his hotel in Nilai, 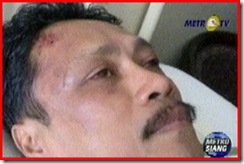 Negri Sembilan, an incident that provoked outrage and threatened to derail Malaysia's and Indonesia's "fragile" bilateral relations. Pak Donald had been attending a Karate event as a Ketua Wasit (chief referee), and was out minding his own business when he was unceremoniously dragged away to be shown Malaysia's special brand of hospitality that ended with him in a hospital emergency ward. Courtesy of the Royal Malaysian Police of course, currently once again being brought to scrutiny: Altantunya, Anwar, girl-raped-in USJ police station, Gemas. Ge-mas? Isn't that in Negri Sembilan too? Well, the State Police Chief was quoted as saying that in no way was transferring the alleged corrupt cops meant that there were "guilty". Yeah, sure.

Was Donald mistaken for an illegal alien? Who knows? I'm not even certain if the perpetrators were ever brought to book; or were they just given a slap on the wrist? Or a nudge and a wink to for "teaching an Indon a lesson"? A subtle thumbs-up? After all, blowing up tourists with deadly C4 explosives is not beyond them.

A few days ago I had overnighted at East Kalimantan's premier hotel in Balikpapan during the busy PON week. PON is Indo short-speak for Pekan Olahraga Nasional, Indonesia's national sports meet for regencies and provinces that is held once every four years, with the Indonesia's richest kabupaten (province) of Kaltim hosting this year's event. It is a bit like Malaysia's SUKMA.

The staff at the hotel there are my eyes and ears; having stayed there often and enjoying their graciousness, friendliness and uh, okay, the delectable staffs' uniform. One of the very pretty PR managers, a Miss Novi, with her impeccable calves shielded only by lacy black silk stockings, had whispered in my ear that that karate referee who was beaten up the Royal Malaysian Police is staying at the hotel too.

With that juicy piece of information delivered by an even juicier conduit, I repaired to to my suite (yes, suite -- I was upgraded during the busy PON week where all the city's hotels were running at 110 percent occupancy) only to abuse the mini-bar. Suitably quenched and inspired, I took a piece of the expensive hotel stationary paper and proceeded to write Donald a letter. Along with my own regrets delivered in terrible Bahasa Indonesia, I signed off with a request for a meeting. I put in my local Indonesian mobile number together with my room number in case he decided to take up on the offer. After having licked the enveloped and sealing it, I took the elevator to the lobby to meet again with Novi, where I unabashedly told her (after gaining the confidence that only a mini-bar's contents can provide) that she has the most lovely legs and the only reason I hang around in the lobby is to cuci mata. And so on, ad nauseam.

For almost two days I sat stewing until it was time for me to leave. Over breakfast on my final day I finally saw my prey. While nonchalantly heading past his table to fill my bowl with Mee Soto, I noticed that the scar above his right temple was still visible. He was sitting in the No Smoking section with some heavy types, whom I presumed also to be national karate referees. That spoiled my chance of walking over and extending a hand; if he was alone, sure, but with these heavies? Who's to say if they too want to extend me the same level of "hospitality" that Donald was shown in Nilai a year ago?

I needn't have worried; he had read my letter after all. Because a few days later he sent me this SMS, which I quote verbatim:

Note that he had extended his "regrets" for not being able to meet me. In his message I felt he showed no animosity to me or to the other 25 million or so Malaysians. Not sure how he still feels about the RMP goons who bashed him though. And why didn't he pursue a claim in the civil courts?

I think he has put this behind him and moved on. I think I shall move on too and delete the poster "Justice for Donald" out of my blog. I don't know if "justice" has been served for Donald or not, nor the perpetrators who had "welcomed" him by beating him to within-an-inch, but inside I feel good. You know, for doing my infinitesimally small part. But raiding the contents of that mini-bar earlier had certainly made me feel better. Not to mention, hornier.

I think I'll leave her alone. For now.