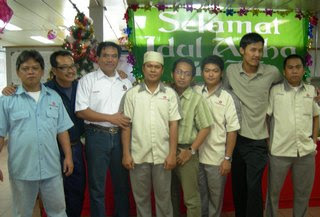 On Rig Yani with Camp Boss, Rig Doctor and Catering Crew on Idul Adha Day.
Rig Yani, Borneo, New Years Day 2007. Dropping by unannounced, three sampans from a nearby Bugis fishing village carrying men, women and children had put the Total Reps in a dilemma: So what should we do ? How do we accomodate these kampong civillians in a highly secure facility like a drilling rig? Does the Total (Offshore Installation) Standard Manual cover this? Apparently these villagers just wished to spend New Year's Eve on a rig, that's all.

replaced by a Welshman who seemed to be a bit of a sport. This was in the boondocks after all, so in the spirit of 'good community relations' our rag-tag visitors, about thirty in all, were allowed to climb aboard. So they were ushered to the recreation room, where barely 12 hours prior was the venue of our Idul Adha prayers. For fear of 'untoward incidents', the cases of Bir Anker and Scotch Whiskies were kept in the pantry - until it was time to bring them them out again to the musholla - sorry, Rec Room - for the midnight revelry. So a deal was struck with the villagers that they should leave by 10.00 pm.

The villagers were feted with leftover ketupats and cakes from the day's Idul Adha's menu, with some sweets and soft drinks thrown in. The Bilal fired up the mini-keyboard with a popular and rousing dangdut number, quickly bringing the crowd to its feet. I spied the proceedings through the window but just can't bring myself to participate (although I was gamely pulled in by one of the village maidens myself) . Sorry, I just cannot reconcile the fact that this particular venue had been our 'mosque' - where we laid prostrate facing Mecca for the Idul Adha prayers barely 12 hours earlier. But now the Rec Room / Church/ Musholla was already filled to the brim with gyrating dancers fuelled by cheesy boisterous dangdut music. 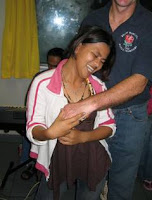 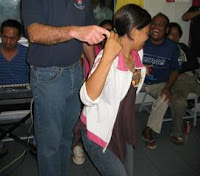 The Total Rep and a 'rather forward' village maiden doing the 'dangdut''..."Good fun, really" said the Welshman. 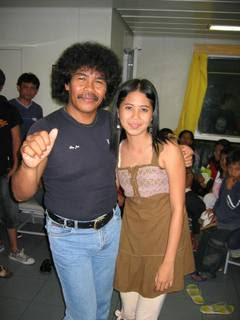 A rather fetching under-aged village reveller, in a pose with my 54-year old (!) Drill Bit supplier...15 hours earlier I stood shoulder to shoulder with him performing the Sholat Eid - Right in this very room!

I knew that the alcohol would be brought in soon after the villagers left, so I quickly sneaked up to the relative quiet and safety of my bunk upstairs. I needed to be up early - after all, it is a working day on the rig.

To be honest, I missed the 'New Year' completely, falling asleep as soon as my head hit the pillow, and my dreams filled with hip-swaying village maidens...

During tea-break the following morning, I asked the groggy Camp Boss for an update. Through blood-shot eyes he said the villagers left at the appointed time, so no problem there. I was interested in the alcohol-fuelled party after the villagers had left - I meant the crew's New Year Countdown Party, because of the sheer quantities of 'that stuff' made available by our paymaster Total-Fina-Elf.

Any spilled on our sejadah (prayer mat)?"

"I put them behind the TV cabinet."


I suppose the 'dangdut joint' can now revert back to its rightful status as venue for hosting our Friday Prayers and Church Services.