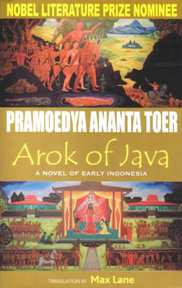 Arok of Java: A Book Review

I ADMIT OF MY IGNORANCE. Before coming to I had only barely heard of Ananta Pramoedya Toer. He has since left us but his legacy lives on in his many books.

It was not only my loss but hundreds of millions Indonesians too since his works were banned during Suharto’s era, thus consigning his works to obscurity. Ananta had apparently written many more but most of his material were reportedly confiscated and burned.

His famed Buru Tetralogy (This Earth of Mankind, Child of All Nations, Footsteps and House of Glass –all available in Penguin Books) and Arok of Java (originally titled Arok and Dedes) was “written” during his incarceration on Buru Island between 1965 and 1980. Suharto had stationeries banned for his special prisoner and Ananta was forced to “write” the book in his head, telling and refining the story to fellow inmates. It was only after his release that he was finally able to pen his voluminous tome. His masterpieces impressed the Nobel committee enough to consider him a nominee.

To keep things in perspective, Bumi Manusia (This Earth of Mankind) was the first of Tetralogy, and should be read first. , the translator for the book was again responsible for Arok of Java, which was only recently completed and published for the first time.

Lane’s earlier translation of Bumi brought instant fame to Ananta. Lane was then a diplomat, an Australian attaché in of the early Eighties. Due to the recognition of Ananta’s works, Lane had inadvertently invited the wrath of the Indonesian government. Lane was expelled from becoming a persona non-grata right until Suharto's fall. Bumi was subsequently forced off the shelves, becoming one of the great tragedies of modern literature.

Set in the 13th century Arok of Java is a novel of “early ” where Hindu Gods and Goddesses reigned. This was before Islam descended on the archipelago and told of our hero Arok of the Sudra caste, who through scholarship became a Ksatria and finally a Brahmin. Many have likened Arok to Robin Hood but it is only a superficial connection. In that era, descendants of great King Erlangga sat in and the outlying areas were controlled by appointed ‘Governors’ who had to pay tribute to the King.

The Governor of Tumapel, a vile villainous character was installed and brought back slavery that was earlier abolished by Erlangga. The Governor was of the Sudra caste who worshipped Lord Vishnu. The Brahmins, who are worshippers of Lord Siva, had lost all their influence and were confined to their temples. The subtext was the past two centuries, the Brahmins had become outcasts and no longer relevant. The precocious Arok who mastered Sanskrit at an early age grew to become a warrior; a scholar-bandit and rebel –his destiny to bring the Brahmins back to glory.

Arok had then started a campaign of resistance. He robbed the tribute coaches en route to amassing the wealth to free the peoples of slavery and suppression. The Governor was perplexed as to the hit and run losses; bringing displeasure to the King. The King was angry at the formers inability to bring order; especially when the Kingdom’s treasury was compromised.

The final straw was when the Governor, a lowly-Sudra himself who by chicanery and deceit became all-powerful, kidnapped the beautiful Dedes, a Brahmani, to make her his consort. His obsession with Dedes was his final undoing and provided the stage for Arok’s entrance.

A blurb from the book’s jacket reads: “As the rebellion spreads, it is Arok himself whom the rulers employ to suppress it . . . Thus emerges one of the epic political conspiracies of Javanese history.”

Arok is an epic saga much in the great traditions of Ramayana and Mahabharata. My only problem was in the book’s editing. There were some errors in spelling that distracted the reader. By contrast, The Buru Tetralogy, published by Penguin, was exquisitely edited. This is but a minor speck in this vast canvas of Anata’s beautiful narration.

A must read; but only after your appetite had been appropriately whetted by the brilliant This Earth of Mankind.

The Game of Tag

Captain Jafflam had tagged me and my response is long overdue. This one is about three personal episodes and lessons learned from 2007. Here they are in no order of importance: