LAST AUGUST 17th SAW Indonesia celebrate its 61st Independence from their previous Dutch masters. With increasing oil prices that has burned holes in their citizens' kantong celana, and calamities both natural and unnatural (man-made) that have befallen the nation, I expected it to be a somber affair. It was far from being somber of course, and like other developing nations elsewhere, there is always a governmental budget to blow on friviolities - parades and fireworks. All governments I suspect like their warga to think that everything is hunky-dory despite the extremely worrying economic indicators. Better to lull them into a false 'feel-good' atmosphere rather than have a revolutions on their hands.

I happened to be on the rig that day, and not only did I witness the event but for a brief moment participated in it too. Does this mean I had become a murtad?†

All I can tell you is that the Indonesians take their Hari Merdeka seriously. Very early that glorious morning all work on the rig had to be stopped, and at great cost to the oil company. For about two hours the crew assembled on the helicopter deck to hear patriotic songs being played over a megaphone, all the while standing in rapt attention saluting the jalur merah putih. But no, in case you were wondering, there was no lump in my throat as the Red and White fluttered in the breeze as the Pancasila (state ideology) was boomed over the megaphone. But to stop work like this on rigs in Malaysia? No, it just doesn’t happen.

The person in-charge of leading the celebration was the rig's L.O. (Liason Officer). We'll have more on the L.O. later. Looking resplendant in his full ex-Captains' naval regalia, he commandeered our small parade and after the flag was raised, delivered a speech from a paper probably sent by his navy masters or BP Migas (the Indonesian Oil Regulating Comission who pays his salary). It was all very impressive since only then did I realize that my crew mates must've rehearsed for the occasion since the marchpast, unfolding and subsequent raising of the Red and White went with clockwork precision.

Curiously, the L.O. is a position found only on Indonesian rigs. In theory the L.O. is the most powerful person on-board, able to ‘run-off’ – dismiss – anybody at will, and has the power to stop operations. But I suspect the post was simply created to make suitable employment opportunities for retired naval officers. Occasionally some L.O.’s would attempt to justify their existence by asking me a copy of my Indonesian residency pass or work permit, which they then unceremoniously dump in the bottom-most drawer to be quickly forgotten. It might as well have been in dumped in a trash basket.

I suppose I can be forgiven for being taken by their local television news. Ever since becoming a bona fide resident and tax payer, I’ve slowly but surely become acclimatized to the to the Indonesian State of Mind. One thing I've noticed is how “emotional” the Indonesians can be. This is a generalization of course. The amateur psychologist in me have been working overtime trying to understand what makes these people tick. The TV news will without fail show scenes of people running amuck; burning effigies and protesting one thing or another, hawker evictions, fighting for better labor conditions, demonstrating against Bush-The-War-Criminal, and lately - US or Israeli flag burnings. Interspersed will be painful scenes of shell-shocked survivors from the recent Java tsunami.

If I were to hazard a guess, the one trait that sets Malaysians and Indonesians apart is probably the latter’s propensity for emotion. Emotions can run the gamut from being hysterical to full-blown rampage incorporating burning and looting. Some might even remember the horrors of the Asian Financial Crisis in ’97 where rampaging mobs (read: Ethnic Indonesian - mostly Javanese) burned Chinese-owned shops and premises. Furthermore, stories abound of gang rapes against ethnic Chinese women in Jakarta during that tumultous time.

But this particular emosi trait is probably truer of their citizens at the lower stratum of society. Having been being dealt a lousy hand in the card-game of life, this powerless and oft-victimized group probably feel that they have the least to lose. Even the Indonesian courts were not spared: Scenes of victims and even defendants alike wailing and crying hysterically in court is not uncommon. One will be hard-pressed to see such scenes in a Malaysian Court, I can guarantee you that.

Is it possible to ‘love’ an inanimate object like a car? Elsie is my trusty 16 year-old Land Cruiser (LC) that I had ‘lovingly’ sent for a makeover recently.

The ubiquitous before and after pictures below. Manyak syiok oo… possibly this how one must feel must feel after undergoing successful plastic surgery. 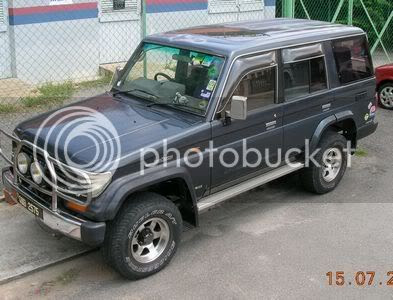 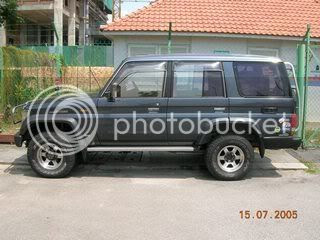 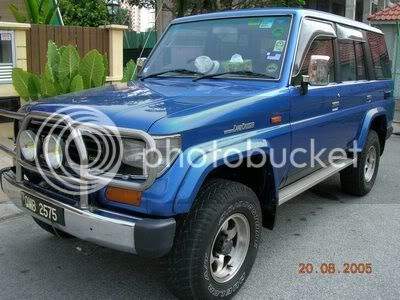 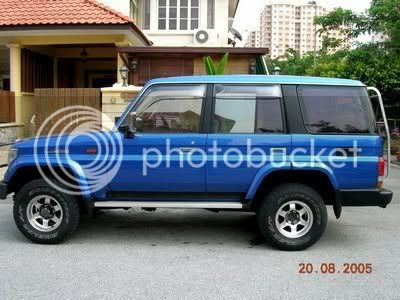 Only in Indo – a Muslim Revival TV show

To further add on the peculiarities – and differences - with neighboring Malaysia, I just saw something on Indonesian TV that left me dazed and confused, because my Melayu-centric mind couldn’t comprehend scenes that was in the programme.

It was a live outdoor event with thousands of people attending. It looked something like a Malaysian TV3 Sure Heboh Carnival – except that this was a 'carnival' in praise of Allah - a religious ‘concert’, if you can call it that. It reminded me of scenes in a Christian revival meet where people openly sang, danced and clapped their hands. In this particular show even bawdy jokes were tendered – all in the name of Allah - and TV ratings.

The two hosts that presided over the show were excellent MC's to say the least, and could easily give Malaysia’s Aznil Nawawi and A.C. 'Disini' Mizal a run for their money. If Aznil and A.C. are entertainers of the Lettermen / Leno school, then the difference is that these host were religious scholars – full-fledged Ustads who graduated form elite Middle-Eastern universities and spoke fluent Arabic. One was supremely telegenic and carried some triple-barrelled Arab sounding name that ended in Al-Habsy something or other. This good-looking Al-Habsy fellow would not be out of place in an Indonesian soap opera. Plus he could crack jokes at will, had tons of stage presence - and best of all had an excellent singing voice when reciting verses from the Quran.

It was a live TV carnival show unlike anything I’ve ever seen - serious preaching one moment (with obligatory Hadith and Quranic verses) then mixed with jokes bordering on the bawdy immediately after, and eventually ending with a nasyid-type song and dance. It was surreal to say the least. The show had special guests – in this particular segment was the band Steven (not a very Moslem sounding name is it?) & The Coconuts. Steven looked like an extremely pious Mat Rock, and he gamely chatted with his hosts concerning his plans 'to be closer to God' for the upcoming Ramadhan. I know, some of you already think the word rock and piety towards God shoudn’t be in the same sentence – in other words - an oxymoron.

They were a traditional rock group but had this time around performed an acoustic ‘unplugged’ set - meaning without electric bass or guitars. Wide camera shots of the crowd, mostly made up of women -young and makciks - wearing the jilbab. And get this – their jilbab'd bodies swaying to the music. I was totally mesmerized. Of course, the crowd weren’t segregated and the men and women sang and danced freely. Everyone looked happy. If not for the skullcaps and jilbabs it could’ve been mistaken for a ‘revival’ meet. To be honest I liked it for its sheer entertainment value. Whether it brings one closer to God is anybody's guess.

On a barely related issue, I was sent a trainee who had recently graduated from the prestigious Institut Teknologi Bandung (ITB – pronounced “ee-tay-bey”). His first name was David, and I can be forgiven for assuming him to be a member of the Christian faith. So I was pleasantly surprised when he whipped out a sejadah (Moslem prayer mat) from his bag.

“What to do Pak, my parents gave me that name”, was his forlorn reply.

Later on I saw images of his siblings and parents run on his laptop screen-saver. I would have been excused if his family is of the ‘secular’ type, but I was wrong. His mother and sisters all wore the jilbab. In other words, David was brought up in a strongly religious and conservative Moslem environment. But why the Christian name then? In Indonesia there are probably millions like David. And amongst other things, that is why there will always be an invisible line that will forever divide Malaysia and Indonesia despite sharing a similar language and faith.