Common sense has prevailed. Both Theresa and Sheih has been released.
God Bless Them.

Our hearts and prayers are with you. Your sorrow becomes our sorrow too. Please be strong and patient. Insya Allah he will come home soon...

You've Got A Friend

With DAP MP for Jelutong

Sandwiches ain't the only thing you're gonna get from Zorro!

With PKR MP from Wangsa Maju 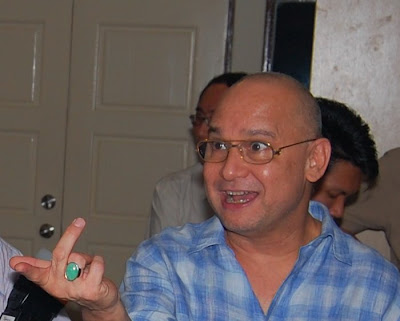 I'm sick and tired of this. I'm embarrassed, ashamed AND OUTRAGED that you have chosen to

Believe it when WE DON'T WANT IDIOTS RUNNING AND RUINING THIS COUNTRY NO MORE!!!

Why use the ISA? Or are you just looking for a convenient scapegoat? Something to thwart and detract the public? If you got proof, please just charge them in open court. Don't hide behind this sorry excuse!

And lastly, please DON'T INSULT THE INTELLIGENCE of us ordinary Malaysians. Doesn't it occur to you that Malaysia is a democratic country and we citizens are masters of our own fate? 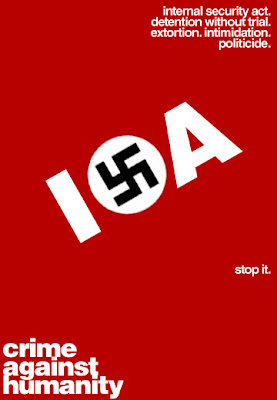 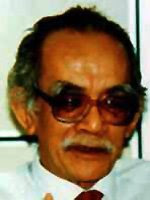 I DON"T KNOW THE MAN. Know-off him? - sure. Never had the pleasure to meet the great Pak A Samad Ismail. Tan Sri. But some of his children, I've met, and proud to call them friends. Children are a man's greatest assets they say, and in this respect they didn't disappoint. One of whom is exactly my age, a boy whom I ran into when we ran through the same circles once, and the other two sisters I met through the local blogging fraternity. I believe a younger sister was a classmate of my own sister too. My condolences to each of you.

A certain sadness washed over me when I first heard the news. When I think of him, I think of his conviction, his bravery. His incarceration: the first time by the British, from 1951 to 1953. A founding member of Singapore's PAP with his then coalition partner, Lee Kuan Yew.

If he hadn't had a falling out with LKY, or the pull of journalism too strong (he left for KL in '59 to head Berita Harian, and later NST), he might have been, at the very least, LKY's second-in-command. Who's to know?

Many years on, his adopted country Malaysia also chose to incarcerate him, sans trial. That's why the I.S.A. is an abomination. An affront to civilized society, an affront to our Maker. All you have to do is look at the gentle soul called Pak Samad - merengkok in that hell hole for seven - SEVEN!- ('76-'81) bloody years and you know deep in your skin-and-bones that the I.S.A. isn't - wasn't - never-ever-gonna-be - right.

All in all he spent almost a whole decade behind prison walls, forcibly separated from his beloved family; from his children who were small at the time. No, this isn't quite so true. It's the I.S.A. after all, where the rules are arbitrary. He could, I suppose, have cut a deal, cop out, admit (falsely), sign-whatever - but he knew better. It must've pained him to see the family suffer . . . because frail as some might think he was, Pak Samad had bags of steely resolve. He put conviction and belief above all else. A testament to his strength.

Thank you for showing us the true meaning of patriotism, and what it means to love our country.