The Best Seat in the House 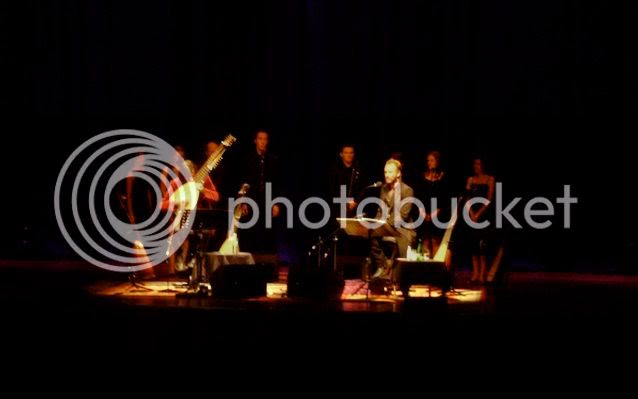 I'VE GOT A CONFESSION TO MAKE: I MUST BE MAD. Music mad. While disaster spirals all around us, all I could think of was the concert. Thanks to my brother in law 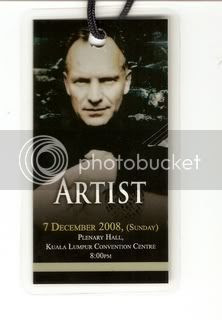 Adrian who was assisting the FoH (Front of House) sound engineer I had the best seat in the house, sitting behind Donal Hodgson (the brilliant Grammy-winning recording engineer who engineered and mixed Sting's latest effort), Sunil (in charge of the mixing board) and Kumar who ran the lighting.

I am proud to say that both Sunil and Kumar are Malaysians; Sting and Hodgson were impressed by their reputation and decided to use their services. Sunil’s day job is technical director for Media Prima’s 8TV but he confesses to make more ‘on the side’. The other Malaysian in the team, Andrew Warren, co-owner of the sound and lighting outfit, along with Jay Neil, both of whom I had the pleasure of meeting. 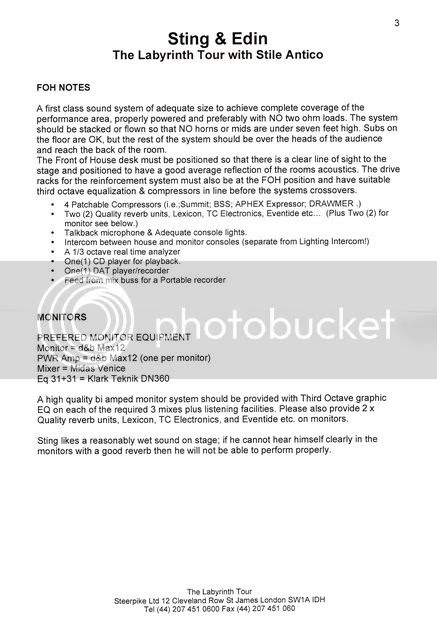 Actually I had known Andrew far longer. A few years ago when I lived in Bandar Sri Damansara (where his offices are located) I sort of barged in his office to chat. I've been known to do this sort of thing for no reason. Actually I saw crates of Meyer sound equipment (hi-end sound reinforcement gear for concerts, and I profess to know a bit about studio gear) being carted off a small truck into his office. I was intrigued so I walked in and accosted the guy. Yeah, just like that. In the course of our conversation it turned out I had also known his father Tony Warren (during my 'pub-crawling' days) who was -and still is - a popular entertainer in the pub circuit. He says dad still performs occasionally at the Selangor Club.

Being of the curious sort I satrted pelting him with questions: how did you get into this line of work? Both he and Jay are graduates of SAE () and were among the first employees of Petronas Philharmonic. Being pioneer Stage & Production Managers with the spare-no-expense oil giant has its benefits: they were sent to studios for additional training. Abbey Road is where the The Beatles recorded their classics, in case you didn't know. After six years in Petronas they decided to hang their boots and form a company. And the rest, don't you just hate this cliche? - is history. 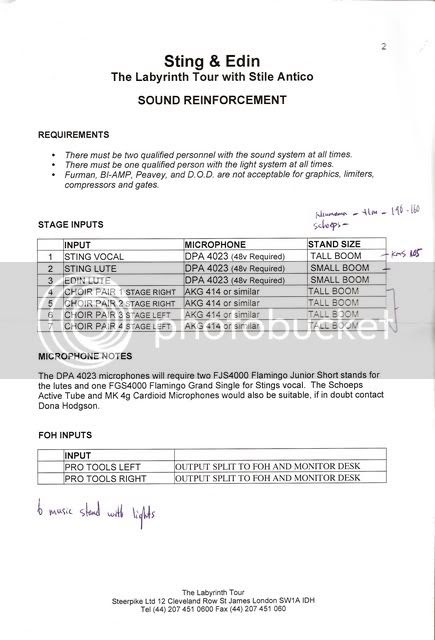 Their roster of satisfied customers reads like a Who’s Who of contemporary music: Diana Krall, Yellow Jackets, The Chieftains, Freddy Cole, Lady Smith Black Mambazo, Michael Jackson, Ricky Martin, Scorpions, Michael Learns to Rock, Deep Purple and now the former schoolteacher Gordon Sumner aka Sting. Not to mention local Media Prima sponsored events and even taxpayer-sponsored excesses like Citrawana of which I’m not certain if the rakyat ever got their moneys’ worth. But I’m not going into that that .

But that night, the day before Muslims celebrated Eid actually, was indeed special. To my untrained and damaged ears (from spending too much time on a drilling rigs) Sting's tenor soared beautifully, and the backing 8-member Stile Anticos choir was simply exquisite. The human voice couldn't impossibly be better. Why I say this is because Sting and The Stile Anticos are superb musicians. In this day and age of desktop recordings and digital studios most of what you hear on CDs (Britney Spears, Kanye West etc), especially the vocals, would have gone through a sound plug-in in the recording phase called Auto Tune. It automatically correct pitches in instrument or voice. Not with these incredibly trained musicians, no sir. There were no other instruments to clutter the mix so it was mostly human voices to the accompaniment of the lutes and arch lutes of Edin Karamazov and Sting.

Ah, the 'lutes. Indescribably resonant; every harmonic scrape of Sting's and Edin's fingers against the fretboard was clearly heard in the mix. The lute, by the way is closely related to the Arabic oud, and is also related our humble gambus. pointed me the mix console showing an -11 dB range ... Whoa, what superb dynamics! Every breath, every rasp from Sting's soulful tenor rang clear. But KL Convention Center's Plenary Hall probably played a part too with its excellent hall acoustics, that's probably why this venue was chosen over, say, Putra World Trade Center.

Maximum seating is around 2,000 for the hall but I think the crowd was less than half of that. Most of your secondary school concerts probably had more people attending. Sting isn't doing this for money; he had just finished a year-long Police reunion world tour that grossed almost half a billion dollars in revenue. I was at the Police concert last February where I saw Sting, Stewart Copeland and a fit 65-year old Andy Summers jumping around like teenage hooligans, playing to packed and enthusiastic audience of 10,000 at the Singapore Indoor Stadium. So that's twice I saw Sting play live this year. I'm embarrassed to say that the ticket costs there ran into four figures when converted into our money. But for music mad people like me it was worth it. Or so, I deluded myself into believing.

For the most part I’m reviewing the sound, not the music itself because my vocabulary is sorely lacking when it comes to accurately describe subtleties and nuances of classical 16th century music. The album, Songs from the Labyrinth was written by John Dowland, an English court musician in the late 1500’s. It was pointed out to Sting twenty years ago by guitarist Dominic Miller (his regular guitarist on his solo albums) who even commissioned a lute to be made for Sting as gift. -born Edin Karamazov, considered one of the world’s greatest exponents of the instrument prodded him further into re-discovering Dowland, whom Karamazov described as “the best songwriter and lyricist in the English language”. And that got Sting hooked.

The lyrics are indeed beautiful, and all songs we hear today can be traced to Dowland. It’s very contemplative and melancholy and deals with pain, loss and alienation. Sounds familiar? What’s true 500 years ago still rings true today.

I suspect many in the crowd were disappointed, especially if they came to listen to Sting play ‘Roxanne’. For the encore he did make a small concession and played a very stirring acapella version of ‘Fields of Gold’ and ‘Message in a Bottle’, accompanied only by the choir and lute. When he strummed the first few bars of Fields, all of a sudden the clapping became more enthusiastic. I shook my head in disgust; not because I don’t like these songs but this isn't the forum for it. It appeared that he wanted to appease the ‘Oh-Sting-playing-tonight-just-let’s-go’ crowd coming to hear him play ‘Englishman in ’. But I don’t blame him; he’s an entertainer after all. 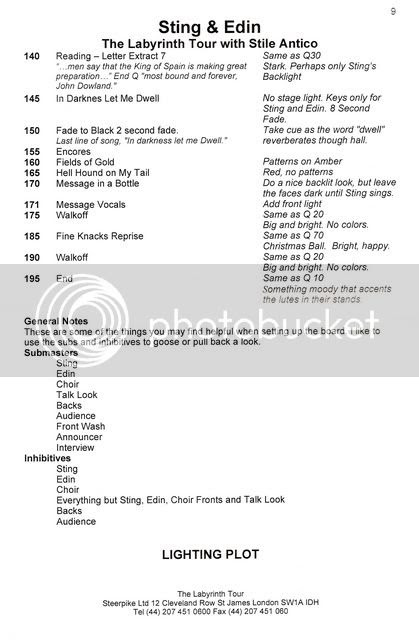 For many who came to enjoy classical music (me included) was duly rewarded. And no million-dollar hi-fi system can ever replicate the superb dynamics of a live acoustic set. Best of all the sound and lighting engineered by Malaysians for one of the best artiste in the world.

And to Andrew, Sunil, Kumar and Jay, you guys make me swell with pride. And thanks for the best seat in the house, guys. 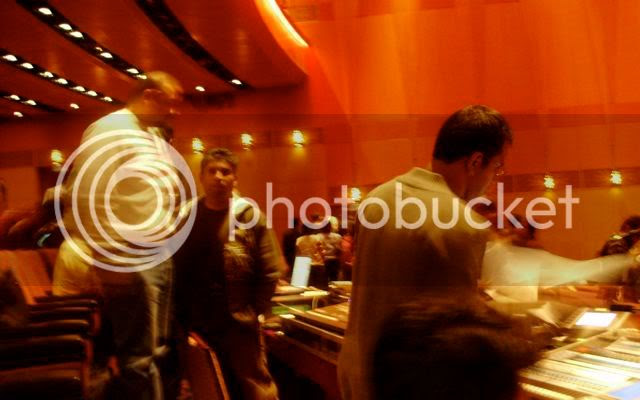 From Left: My brother-in-law Adrian, Sunil and Kumar

Note: During the sound check earlier in the afternoon Sting came down to their mixing console to listen in. All three confessed to being tongue-tied and star-struck. Who wouldn't?

I conveniently stole Sunil & Kumar's Sound Engineering, Lighting Design & Stage Notes from their console which was given by Sting earlier. Interesting to note what Sting likes to have in the dressing room. 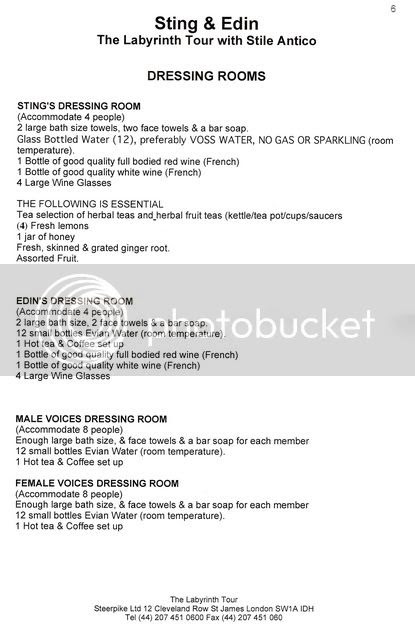